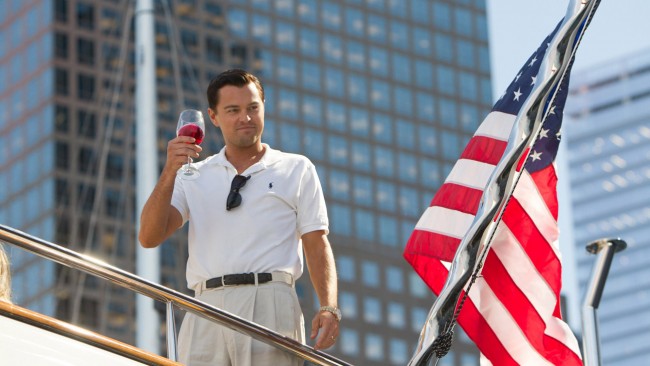 Some reviewers are calling The Wolf of Wall Street “Scorsese’s best film since Goodfellas” and star Leonardo DiCaprio has opened up on at least one of  several stories related to his latest part.  Sex scenes, chimps and luxury penthouses are the items of the day.

Directed by Martin Scorsese, and starring DiCaprio, along with a host of other stars, The Wolf of Wall Street will be taking off on Christmas Day and some interesting comment has emanated from the upcoming release.

First things first, a representative from the Extra website sat down and interviewed DiCaprio and asked him whether he used body doubles for some of the rather racy sex scenes in the film.  Apparently not, as DiCaprio says  “It was all me, pal… all the flopping around, everything, it was all me!”

This apparently even included a sex scene which involved a candle, which we’ll just ignore for now.  Watch the movie if you want to know more on that subject …

However, DiCaprio did stress that when playing a character such as his part in the latest movie, you have to “go all-out” and not pull any punches.

In the film, Oscar nominee DiCaprio plays the part of a real-life stockbroker Jordan Belfort and the script documents the rise and fall of Belfort on the Wall Street scene.

Apparently when DiCaprio read the script he actually became obsessed with playing the role, it fascinated him so much.

Hence Leonardo DiCaprio ended up starring in the movie The Wolf of Wall Street, which brought about so many varied and related stories.

PETA and the Chimp:

DiCaprio did, however, have a run in with the People for the Ethical Treatment of Animals (PETA), in connection with a party scene he plays with a chimpanzee called Chance in the film.  PETA is asking Leonardo DiCaprio to “never work with great apes again”, saying that the chimp experienced “inhumane treatment” in the scene from the movie.

PETA apparently sent the actor a graphic video, showing the inhumane treatment of chimp actors.  They also explained that the family that owns Chance, the chimp in the movie, is apparently well-known for the poor treatment of its animals.  He apparently completely ignored their pleas and went ahead with the scene anyway.  PETA was miffed.

One of the most stunning outcomes from the making of The Wolf of Wall Street, is probably the recent offering on the property market of the luxury penthouse which was DiCaprio’s home on the set, for $6.5 million.

The 2,500-square-foot, three-bedroom home might be out of the reach of most people, unless they are successful on Wall Street of course.  Just to tempt you the home has a grand entrance, which leads into a spectacular and spacious living-dining area and a massive 200-square-foot terrace overlooking all of Midtown.

Other stars in the movie include Jonah Hill, Matthew McConaughey, Jean Dujardin, Margot Robbie, Cristin Milioti, Rob Reiner, Jon Favreau among others  and, of course, Chance the chimp.

So this Christmas, do yourself a favor and go see Leonardo DiCaprio in his latest movie, The Wolf of Wall Street  and learn more about all the related stories involved in the new Scorcese epic.