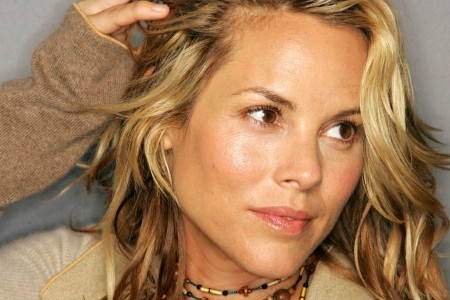 Maria Bello, an American actress currently seen in the film “Prisoners,” has revealed she is in a lesbian relationship. The revelation appeared Nov. 29 in a New York Times Modern Love column she had written.

In her NY Times piece, titled “Coming Out as a Modern Family,” Bello explains that her 12-year-old son, Jackson, asked her about romantic relationships and she chose to be honest with him, saying she is currently in a lesbian relationship. Before the conversation with her son (whose father is producer Dan McDermott), Bello had consulted with a therapist about broaching the subject of her romantic relationship with a woman named Clare, who is also her best friend. The therapist suggested Bello wait until Jackson mention anything about romance and relationships. Bello took a deep breath before she told Jackson about her romantic relationship with Clare. Jackson’s response seemed to be one Bello didn’t expect: ““Mom, love is love, whatever you are.” Yes, whatever. Exactly. His reaction is the same reaction all of us should have. Love is love, right?

Before Bello told her son about Clare, she decided to tell her family first. She worried her announcement would have a deleterious effect on her traditional Polish-Italian family but the family’s reaction appeared to be one of unhesitating acceptance. Bello writes, “Maybe they weren’t so traditional after all.”

Bello was understandably hesitant about revealing her lesbianism. Hollywood may have more “out” actors now in the industry but the stigma remains. Actors never know when their next job will be, and Hollywood is notoriously fickle. Luckily, for Bello, at age 46, she’s been acting for more than 20 years, getting her start in a small film in 1992.

In her latest Twitter post, on Nov. 29, Bello said, “Giving thanks for my modern family. Happy thanksgiving for whatever kind of family you have,” and posted a photo of herself, Dan, her son and another woman who is apparently Clare.

Bello is not the only public figure to come out recently. Olympic diver, 19-year-old Tom Daley, posted a YouTube video Monday for his fans, announcing, “”come spring this year, my life changed massively when I met someone and it made me feel so happy, so safe … That someone is a guy.” His coming out moment seems to have elicited nothing but support; his intention was to put to rest the rumors of his homosexuality.

What will happen now that Maria Bello has revealed she’s a lesbian? Let this be a “whatever” moment and go about our daily lives, just as Bello and Daley are doing.

@dghost: As if I needed another reason to love Maria Bello, she came out with a shrug in NYT: Coming Out as a Modern Family.

@JasminAnnalise: did you see Maria bello is the hot bar owner in coyote ugly came out too. Cheeky lil babe.

@PQMonthly: Congratulations to actress Maria Bello and Olympic diver Tom Daley, both of whom came out as queer …

@rupertgrunt: maria bello’s story made me cry a lil (a whole lot)