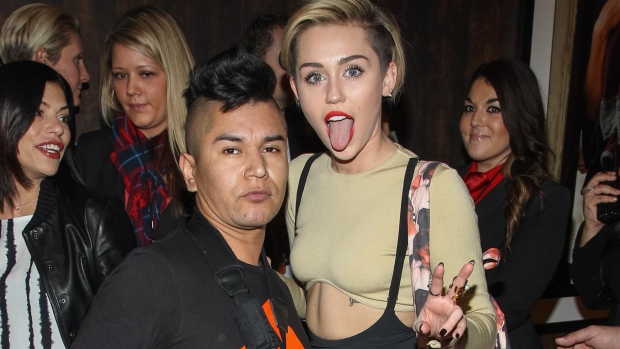 Miley Cyrus is on the kissing attack. The Wrecking Ball songstress seems to be willing to spread her love a little too willingly nowadays. Britney Spears opened her Piece of Me Las Vegas show this past Friday, looking sensational. In attendance, star power was available for support including Katy Perry, Selena Gomez, Adam Lambert and of course, Miley. From this list of studded stars, which one twerked up against a back-up dancer, grabbed another and laid a kiss on her?

Hint. It is in the title.

Miley just cannot seem to just chill out. The ever-growing antics of the pop princess just continues to cause a wave of sighs. After Miley grabbed the surprised dancer, the two beauties bounded back towards the stage. This calls to mind complete distaste. Imagine for a moment had Miley been a male and grabbed one of the singers to rub against, hold their head and forced upon them a kiss? Alas, this writer will step from the soapbox before gathering the momentum to arrive there. In a moment that should have highlighted the comeback of Britney – Miley, not so surprisingly made it about herself. It seems Miley was not done when it came to spreading her questionable kisses. Twilight heartthrob, Kellan Lutz became a target.

Beacher’s Madhouse in Las Vegas was celebrating their grand opening and Miley ventured over with her posse. Once there, Miley was reportedly dancing suggestively with her assistant, Ceyne Thomas. Rumors heated up as sources report Miley and Kellan arrived separately but connected around 2:30 a.m.

Witnesses state Kellan and Miley were talking intimately and during their conversation, Miley leaned over, rubbed Kellan’s back and even kissed his ear. Rumors also suggest the couple left together, stirring reports of a possible relationship. Other sources state Kellan left alone – the rumors continue to buzz. One unnamed source states that Miley and Kellan may be ringing in the New Year together as she has invited the actor to her show.

Miley’s antics continues to keep tongues rolling, including her own. Ever since her split from  Liam Hemsworth, Miley has certainly become darker – more outrageous with sexually laced acts, innuendos and completed actions. Sure, no one expects a singer to maintain a “good girl” image as they rise from the depths of childhood fame. The irony is Miley’s antics during a Britney concert. Perhaps, Britney can pull Miley aside and coach her on the act of reinstating a sense of class. Britney has certainly overcome her darkest moments and was brilliant during her show.

While Miley’s acts may had offended the eyes of those who think one should ask before kissing – Britney shared her love and appreciation for the star support in the audience. The Vegas talent took to Twitter to send tweets to both Katy Perry and Miley for showing up. Her thank you list is sure to grow as other stars arrived for support of the prospering singer. While Britney has finally gathered her act together, it seems Miley’s is just falling apart.

At times it looks like the destructive path Miley is on is purposely created, by her own hand. Other times, it seems too outlandish to manage control. It appears her “people” have completely let go of the reigns, whoring their starlet for fame, power and control of the spotlight. This destructive behavior will not have a happy ending.

There is shock and then there is complete and utter destruction. Miley is losing too much control to start regaining it. Miley has influential parents and it is surprising the pair has faded into the background to watch their daughter come apart at the seams. Of course, as a parent, one cannot monitor every move, but with the negative press Miley brings, one would think her parents would step into the arena to offer advice on how to handle fame.

Alas, another Miley moment has struck. Last Friday during Britney Spears concert, Miley was caught up in the addicting rhythm as she twerked a back-up dancer and kissed another. Later that evening, Miley took her kisses to a nightclub to land one on Kellan’s ear. Miley is either a genius or a complete wreck – what are your thoughts?