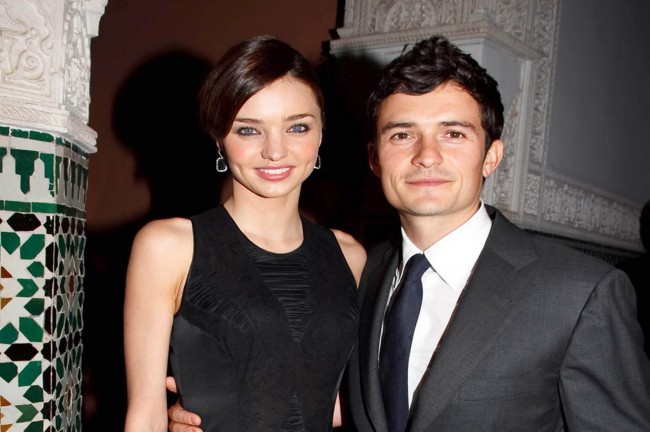 It doesn’t happen often in Hollywood, but this time a separated couple are still friends. Early this year, Miranda Kerr and Orlando Bloom brought an end to their three years of marriage, insisting that they were still friends. They were recently spotted together, with their two-year-old son, Flynn, in New York.

Victoria Secret model, Kerr, did previously state that it wasn’t a definite end to the relationship; however, recent rumors and sightings would say that isn’t true. The 30-year-old Australian actress is reportedly in a relationship with billionaire James Packer, and has been for the past few months. When asked about the rumors, Kerr didn’t deny them.

Packer has recently divorced from his own wife, Erica Packer. Ms. Packer and Kerr are both from the same town in Australia and both cover stars for Vogue.

Pirates of the Caribbean star, Bloom, opened up about the end of his marriage at the start of last month. He insisted that their relationship would remain friendly for the sake of their son. They both want the best for Flynn, and will continue to support each other in their careers. His soon-to-be ex-wife also confirmed that they both love their son and each other, stating that they would “always be a family.” There have been Hollywood couples who have said that in the past, but only the minority see it through. Let’s hope that Bloom and Kerr are among that minority.

If Bloom and Kerr do remain friends, and successfully work out a schedule for co-parenting, they follow in the footsteps of stars like Peter Facinelli and Jenny Garth, Ryan Phillipe and Reese Witherspoon, and Bruce Willis and Demi Moore.

It is clear that the Hollywood couple wants to keep the private matter behind closed doors. Neither have opened up about the true reason behind the split, just that life doesn’t always work out as planned. Neither have been in the papers much before or after the split, except recently with the possible relationship between Kerr and Packer. Could it be that their relationship was the real reason behind the Bloom-Kerr split?

Spokespeople for any of the parties have declined to confirm anything as of yet. It does seem convenient that both couples would separate within 45 days of each other, and then be linked to each other in this way. Of course, it could also be coincidence as Kerr and Packer have known each other for many years, and would go on vacation with each other’s families. The billionaire even provided some business advice for Kerr when she released her own brand, Kora.

At least recent shots do show that Bloom and his ex are trying to work things out for their son. They have been snapped together in New York, and Kerr was seen with her son, who was clutching his toy sword, watching Bloom perform on stage in Romeo and Juliette. Kerr posted her own picture on Instagram to show how much her son was enjoying the performance. There is hope that Bloom and Kerr can remain friends.