British Olympic diving star, the bronze medallist Tom Daley, has posted a self-filmed video on YouTube announcing he is in a relationship with a guy.  His honesty in coming out  has been widely commended by fellow sporting celebrities and gay rights groups. In “Something I want to say” (see below) the young sportsman is candid and clear about his private life.

Tom, who is 19, said that he met someone in the spring of this year and his life “changed massively.”  His new love makes him feel “so happy, so safe, and everything just feels great.”  He thinks now that it was always in the back of his mind that something like this could happen, but when it did, it “just clicked” and “my whole world changed there and then.”

Scores of female Daley fans may be pleased by the news that he still fancies girls too, but for now, he is “dating a guy and couldn’t be happier.

The Chairman of the British Amateur Swimming Association, Edward Lord, was on of the first to congratulate the young diver. He said it was very brave to be one of the first Olympic athletes to come out and that “We must all support Tom in taking this incredibly courageous step.”

Edward Lord added to his comments by hoping that all young people, not just sportspeople, could see this as a sign to be open about their sexuality and said “I am very proud of Tom.”

Daley, who did not perhaps do quite as well as was hoped in the London Olympics, has his sights firmly set on Rio, where he is aiming for that elusive Gold.  He told his followers “I am still as motivated as ever to do that (win the Gold in 2016. ) It would be great to have you guys on that journey too.”

Former footballer, turned sports commentator, Gary Lineker, tweeted his congratulations, “delighted that @TomDaley1994 is happy in his new relationship. Well done for sharing it. Good luck to them both.”   His sentiments were shared by Stonewall, who campaign for gay rights. They tweeted, “Moving and inspirational video from @TomDaley1994. A role model for thousands of other young people.”

Rower Matthew Pinsent tweeted a “Well Done” as did Barney Ronay, sports writer, who hoped he wasn’t pressuried by “scummy hacks.” Owen Jones, another writer,  sagely remarked that “One day coming out as gay won’t be news at all, but in the meantime, lets hope other sports stars show Tom Daley’s courage.”

Daley was subjected to some cruel taunts by twitter trolls about his father who died in 2011.  The implication was that he had let his Dad down by missing out on medals. One twitter user was arrested over this.  He now says that his Dad’s underlying message to him always was “As long as you’re happy, I’m happy.” He said his Mum, Debbie, had been incredibly supportive as well.  Other family members were not so keen on him going public, but he wanted to put an end to any rumours.

In the 5 minute video clip, Daley stresses that he has a big committment to honesty, and it angered him recently when he was misquoted in an interview. He wanted to put an end to any speculation before he set off to training camp in Houston and was glad to have got it off his chest.  He accepts the people will “make a big deal of it” but asks “Is it a big deal? I don’t think so.” 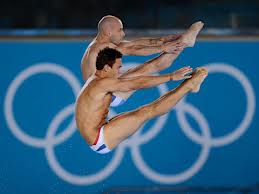 There are still relatively few sports personalities who have come out as gay. Fellow divers Greg Louganis, and Matthew Mitcham revealed they were gay, as have the Welsh Rugby Union Captain, Gareth Thomas and soccer player, Robbie Rogers.  Womens boxing gold medallist Nicola Adams was polled among the most influential lesbian, gay bisexual and transgender people in 2012.

Tom Daley’s revelation comes just after popular Olympic commentator, Clare Balding, spoke openly of her sexuality when she appeared as the guest on the iconic Radio 4 show Desert Island Discs.  After she had told the presenter, Kirsty Young, that her Grandma had found the news of her being a lesbian to be “disgusting” she went on to discuss the forthcoming winter Olympics in Russia.  There have been calls for boycotts after Vladimir Putin’s anti-gay stance.

Clare Balding said it was more imperative than ever for her to go to Sochi in 2014, despite the Russian gay rights record. She feels that it would “make no difference to anyone at all in Russia” if she did not, and as an openly gay TV personality, she did more good by appearing.

By coming out as gay on YouTube, Tom Daley has undoubtedly taken yet another brave and awe-inspiring dive. Into the arena of public honesty.