Murdoch Insulted in His Own Paper 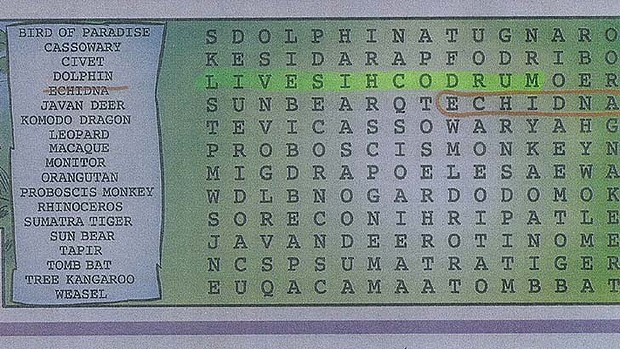 Rupert Murdoch may or may not turn straight to the Harry the Dog kids puzzle page when he gets his copy of The Sunday Telegraph, but if he does, he may have been in for an unpleasant surprise this week, finding himself insulted.  Probably not what he would expect in a newspaper he is the proprietor of.

Harry the Dog, aka “News Hound”  does a section of jokes, funny stories and quizzes in the “Funday” part of the paper, and this week’s word search was a quest to identify the fauna unique to Indonesia.   Word search puzzles can be read in any which direction, which may explain why in amongst the clues for Sumatran Tiger, Proboscis Monkey, Komodo Dragon and Bird of Paradise, was the lesser well-known LIVESIHCODRUM on line three.  Try reading that backwards.

It could just be a coincidence, of course. Harry the dog’s creator and the Sunday Telegraph have declined to comment, and so has Mr Murdoch. Twitter has been enjoying the joke though. If the boss had indeed been castigated by his own in-house comedian, as one tweet put it, “I fear someone is about to get fired.” The Fairfax Media, Murdoch’s long term rivals in the country, joined in the tweet chorus, adroitly noting, “Someone’s been having some fun in the Sunday Telegraph.”

No one has recorded how long it took the average kid to complete the word search but it took the Australian media two days to spot the hidden jibe.

The Sunday Telegraph is a powerful voice in Oz, where it is the biggest selling paper. Its influence extends deep into politics, where, as is often the way with Murdoch press, its support can make or break an election.  It urged the voters to “kick out” the last government, and they did.

Embedding of supposed secret messages is more usually associated with the music industry where it is known as backmasking.

Back in the day, musicians used to have fun recording what sounded like gibberish, but when played backwards, would reveal a coded message. Censorship used to be much stricter as to what could get played on air.  Often these were reputed to have some sort of Satanic connotation.  The Beatles mucked around with backmasking on Revolver 9, Led Zeppelin is said to have done it on Stairway to Heaven, and more recently Jay-Z’s rendition of the Dangermouse song, Lucifer 9, is purported to have a spooky code within it.  Queen’s song Another One Bites the Dust has long been suspected of recommending “Its fun to smoke marijuana.” Hollywood Records have strenuously denied this and it could well be a case of simple phonetic reversal.

Others, perhaps like Harry the dog, have made a joke out of the obsession. Weird Al, in I Remember Larry, put in a nonsense phrase which turned around, could be heard as “Wow, you must have a lot of free time on your hands.”  Pink Floyd did something similar with Empty Spaces from the album The Wall. In a swipe at people looking for embedded message,s Roger Waters tells them to send answers to “Old Pink, care of the Funny Farm,” and then breaks off to take a phone call from his wife.

Missy Elliot used backmasking on her track Is It Worth it, but that was neither to get around censorship nor to whisper a secret; it ties into the concept of the song. “I put my thing down flip it and reverse it,” she sings, and then there is the same in gibberish, but it repeats when played backwards. It’s still an in-joke but it keeps to the integrity of the original lyrics.

The most famous of all of these is probably the Led Zeppelin song, but the band themselves and the record company, Swan Song, always ignored the claim and said their turntables played in one direction…forwards.

It could all be put down to coincidence, phonetic reversal, or sometimes, people just hearing what they want to hear. In the case of Harry the dog and his LIVESIHCODRUM, could seeing be believing?

Whether it was intentional or not, it is unlikely that Rupert Murdoch is finding it amusing, to be thus ridiculed in one of his own publications.