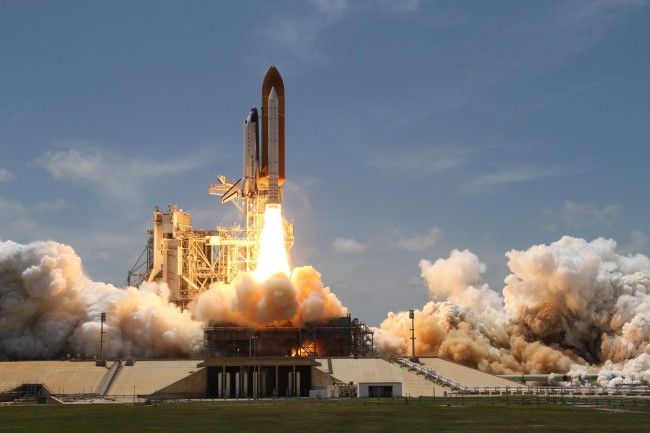 NASA, the National Aeronautics and Space Administration, a second generation evolution of NACA (National Advisory Committee for Aeronautics), in a speculative look, exemplifies mankind’s hopes and dreams of the future. It is a physical representation of what can be achieved beyond man’s current worldly dreams. Currently the world faces a cap on most resources, chief among them crude oil, where eventually there will come a time when there simply will be nothing left, even as the world population continues to increase. NASA is a strong beacon pointing to strong solutions for dwindling resources and other problems that may be pushing the entire world towards an extinction level event.

Credit should actually go to the Russians for getting the ball rolling with its 1957 launch of Sputnik I, officially ushering in the Space Age. However, not long after, NASA positioned itself as the forerunner of all things space. 1969’s landing of the first man on the moon really kicked things off for man’s incursion into space. Between 1969 and 1972, 12 men have walked the surface of the moon. It was inevitable that projects like Skylab and the Shuttle program would hit the drawing boards.

On January 28, 1986, shortly before noon, Space Shuttle Challenger came apart over the Atlantic Ocean 73 seconds into its launch, killing the entire crew. That brought the Shuttle program to a screeching halt for 32 months, prompted the creation of the Rogers Commission, and derailed the Air Force’s decision to use the Shuttle for classified satellite launches. A number of factors had been the cause of the disaster, starting with an O-ring failure in one of its booster rockets and temperatures too low for operation to begin with. A particularly scathing analysis had Bob Ebeling of Morton Thiokol, designer of the booster rocket, including its O-rings, saying, “We’re only qualified to 40 degrees … what business does anyone even have thinking about 18 degrees, we’re in no man’s land.” So a speculative look at NASA in this unpleasant light makes it seem like anything else space related was doomed never to begin.

Eventually, the march to space continued and Skylab became a reality. So did the International Space Station and the Hubble Space Telescope. Enter other projects like unmanned probes to Mars (one is a rover currently rolling around its surface zapping things with a laser) and the outer Solar System. Cassini, since June of 2009, has been photographing a weird hexagonal vortex in Saturn’s upper atmosphere from which NASA has recently put together a video from the stills.

So what else is currently on NASA’s plate? How about… farming? NASA announced plans to grow cress, basil, and turnips on the surface of the moon, inside a truly high tech terrarium to protect the crops from hard radiation and the moon’s lack of an atmosphere. It is the first major life science experiment ever to be conducted and is slated for a 2015 launch. It doesn’t take a brain trust to figure out what the ultimate goal of the experiment is: to see how feasible deep space farming is. The immediate payoff of that is an unlimited source of food. So a speculative look at NASA would seem to have them on course for the future of mankind eventually walking the stars—or at least the local solar system.

Sputnik and The Dawn of the Space Age