NASA Says Water May Now Be Flowing on Mars

By Brent Matsalla on December 16, 2013Comments Off on NASA Says Water May Now Be Flowing on Mars 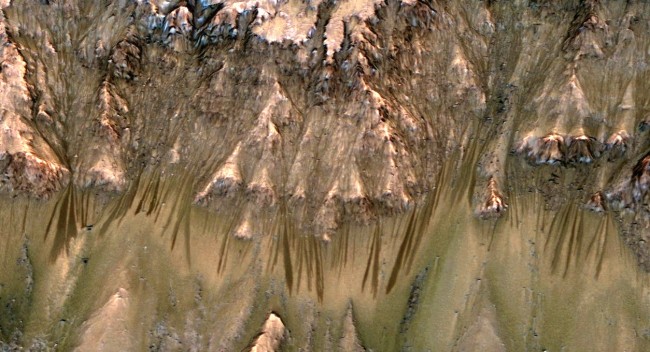 In recent days, NASA has reported that their Curiosity rover had discovered the remains of a freshwater lake on Mars. Now, Popular Science says the Mars Reconnaissance Orbiter has spied some curious dark ‘finger-like’ features near Mars’ equator. Experts are saying that the dark ‘finger-like’ appearance of the soil in this area may offer up evidence that water may now be flowing on the surface of Mars.

Mars is typically considered a dry and barren planet, but these observations may prove that the liquid appears in the Martian winter but it evaporates in the warm summer sun. What type of liquid this may be is questionable; it may be water, briny water, or even another liquid.

Of course NASA still needs to confirm the flowing water or liquid, as there are other scientific theories of what these dark ‘finger-like’ formations actually are. Some scientists say that these are just soil and rock anomalies that have been shaped by the Martian winds. If NASA was able to confirm the find it would likely change their understanding of the alien environment. Scientists are hoping that the discovery of flowing water may increase their chances of discovering life on Mars.

Mars has shown us that there is clear evidence that water once did flow across its surface around 3.7 billion years ago. This is evident where the Curiosity rover has investigated and explored in an ancient river bed and more recently in the ancient freshwater lake. However, with the planet’s lack of atmosphere we should not be seeing flowing water now.

NASA first spotted the dark ‘finger-like’ features back in 2011, but recent examinations have experts saying that they actually do show what appears to look like a “heck of a lot like liquid water.” A planetary scientist at the University of Arizona in Tucson, Alfred McEwen, is just one scientist that would disagree.

McEwan and his team have found 12 other locations around the equator that also contain steaks in the soil. With the Martian equator sustaining nearly the same temperature year-round, Mars would need to possess a mechanism to replace the flowing water. The scientist said that the low atmospheric pressure on Mars would make the water sublimate into a gas almost immediately.

Past studies have found another 7 locations of the darker soil appearing at the middle latitudes of Mars. These sites located in the southern highlands have warm summers and freezing winters. These dark fingers appear to be water just under the Martian surface and are now called “recurring slope lineae.”

Scientist would agree that Mars does contain water in some areas, like under the surface, bound up in the soil itself, and frozen on the surface at the poles. However, flowing water would be the most likely place where life may exist. This does make it more crucial that probes sent to these areas in the future are properly sterilised. If microbes from Earth are to survive on the Martian planet, then they will be able to survive on these slopes. Scientists recently discovered a whole new species of microbes that could survive in the most sterile spaceship construction labs.

Discovering flowing water on Mars may aid future colonists of the alien planet. The privately funded Mars One project has plans of establishing a human colony on the planet by year 2025. The Martian colonists could take advantage of any flowing water that the planet may have to offer.

For now, NASA plans to keep observing the dark streaks from the Reconnaissance Orbiter, where the water does appear to be flowing on Mars. Closer observations and experiments may be planned for the future.