By James Fenner on December 16, 2013Comments Off on Arctic Sea Ice Volume Resurges, According to ESA’s CryoSat 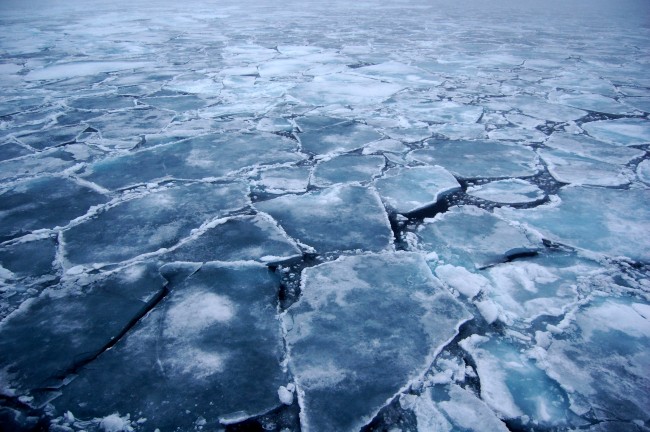 Arctic sea ice volume is reported to have increased by approximately 50 percent when measured in October, relative to the same period in 2012. The new data was collected by Europe’s CryoSat satellite – a European Space Agency (ESA) operated satellite, designed to monitor sea ice thickness and provide information pertaining to the behavior of coastal glaciers.

The satellite recently measured around 9,000 cubic kilometers of sea ice during the month of October, representing a significant increase from the previous year, when a volume of just 6,000 cubic kilometers was recorded. The minimum ice extent in the Arctic was recorded as 5.10 million square kilometers for this summer, again, significantly higher than 12 months previously, at which point the area of floes amounted to as little as 3.41 million square kilometers.

Scientists have attributed the rebound to a transient delay in melting in the polar region. Some experts conjecture the decline in sea ice to be caused by decades of regional warming, triggering the gradual disappearance of Arctic ice on both land and sea.

The ESA launched the satellite, CryoSat-2, on April 8, 2010. Carrying two sophisticated instruments, the CryoSat-2 is capable of measuring the depth of floating sea ice, allowing annual variations to be monitored. The satellite’s primary instrument is SIRAL (synthetic aperture radar/Interferometric Radar Altimeter), with a number of operational modes that differ, based upon the location at which CryoSat is situated.

During the interval CryoSat-2 has been functional, the craft has observed a steady decline in autumn ice volume. However, due to a cold summer, the volume of sea ice for the Autumn of 2013 sharply increased.

The volume of sea ice varies throughout the year, contracting during the summer period and expanding during winter. Some climate experts believe these changes to correspond with a man-made shift in the climate. However, scientists also caution against interpreting such information without looking at the trend over the decades.

Rachel Tilling, working for Britain’s Centre for Polar Observation and Modelling (CPOM), recently described the resurgence in ice thickness as unexpected. During a recent press release, Tilling expounded upon the latest findings:

“We didn’t expect the greater ice extent left at the end of this summer’s melt to be reflected in the volume… But it has been, and the reason is related to the amount of multi-year ice in the Arctic.”

According to Don Perovich, a sea ice scientist at Dartmouth College in the United States, CryoSat’s data remained consistent with other spacecraft observations. During previous summer periods, some of the ice moved over areas of Alaska and Siberia, where upon they melted. However, this summer, the ice has remained relatively static, due to a difference in wind patterns, consequently resulting in greater retention of ice; this is particularly evident around the Canadian archipelago and North Greenland, where multiyear ice is more common.

The ESA argues that this does not alter the perceived trend of decline and goes on to explains that 90 percent of the increase is due to the growth of multiyear ice; this multiyear ice endures multiple summers without melting. As a result, just 10 percent of growth is associated with first year ice.

“It’s estimated that there was around 20 000 cubic kilometres of Arctic sea ice each October in the early 1980s, and so today’s minimum still ranks among the lowest of the past 30 years.”

Shepherd also reiterated the importance of considering the news with respect to trends of change that have occurred over the last few decades.

The findings of the latest CryoSat study were recently presented to the American Geophysical Union (AGU) Fall Meeting, with the release of the yearly Arctic Report Card.