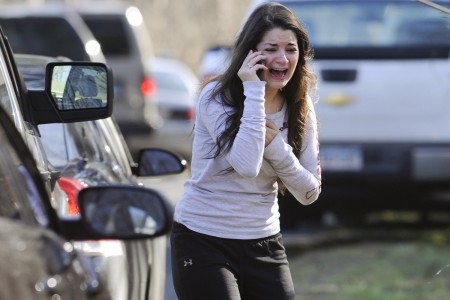 The Newtown school shooting 911 tapes were released to the public today and the horrible event is being revisited on Soundcloud. Last year, on December 14, gunman Adam Lanza, age 20, shot his mother, Nancy Lanza, to death in their home. He then went to the Sandy Hook Elementary School in Newtown and, in a shooting spree, he killed 26 people before killing himself.

The Newtown school shooting was so devastating that Newtown state official initially tried to prevent the audio release, in an effort to protect the victims and their families. Seven calls were that day to 911 by school faculty, describing the Newtown massacre as it unfolded. However, a New Britain Superior Court Judge opined that delaying the release of those calls would only serve to create speculation about law enforcement officials and undermine our confidence in them.

The Newtown school shooting should never have occurred, in the first place.  Now that the 911 tapes have been released, school Superintendent John Reed is very concerned.  Reed strongly urges parents to guard students from media exposure, and rightly so. The Newtown school shooting was a chilling event not easily forgotten, and now the release of the 911 tapes may re-opened many of the wounds.

Newtown’s chief executive First Selectman, Pat Llodra said that publicizing the tapes produces a “new layer of pain” for many people in the community. Llodra stated that listening back to those calls makes victims, their families, and the entire city revisit that day of horror and tragedy.

The audio recordings impart both anguish and calm from the faculty, as gunshots ring out in the background. The weapon used by gunman Adam Lanza to kill 26 people was the same semi-automatic assault rifle that he used when he took his own life.

In a matter of five minutes, the gunman killed 20 children, 12 girls and 8 boys, ranging in ages between 6 and 7 years old, and 6 female staffers. Frantic teachers, workers, and others made all seven of the calls to 911 that day during those horrific moments in this tragedy.

According to news reports, the recordings of the emergency calls to 911 were not to be released until 2:00 PM, EST., today. However, The Connecticut Post newspaper allegedly released the tapes about 30-minutes earlier than the scheduled time.

NY Daily News reports that state police received other calls pertaining to the massacre. Those calls are pending a request by the Associated Press for release under the Freedom of Information Act and are the subject of that separate request.

Kathleen Carroll, AP executive editor, said that 911 tapes and other police documents are a matter of public record. Carroll agrees that this incident was a horrible crime. She added that, while it is clearly understood why people have a strong aversion to the release of these tapes, it is also crucial to bear in mind that responsible news organizations must review them as part of responsible news-gathering.

Following the massacre, Newtown residents had received the assistance of Richard Harwood, of the Hardwood Institute for Public Innovation. As the Newtown school massacre 911 tapes are revisited, Harwood stated that the release of the calls would not help a community that is still grappling to find closure. “I think it’s going to be tormenting. At each turn, the people of Newtown have been asked to relive this tragedy. Last week’s state report, now this — it’s a lot to handle,” said Harwood.