Newtown – Shooting Guns and an Anniversary 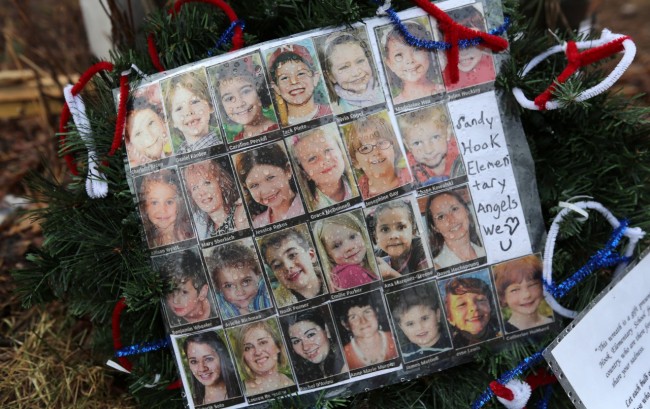 Shooting guns in schools, malls, theaters, military bases, city streets, homes and the burbs dominates the public’s attention on this anniversary of the tragedy in Newtown.

Yes, America is a violent country. Americans have said that enough times to make it the cliché it is and because it’s a cliché, a too often repeated observation, its lost the power of its import.

Read it again: America is a violent country.

Americans live with the appellation and description because America is also a freedom country, which is to say: Americans are a free people.

Somewhere along the line Americans have convinced themselves that being free is a fair trade off for shooting guns, for violence, or for living among others who are violent.

Perhaps the equation is wrong. Perhaps Americans shouldn’t be so willing to accept the bloodshed in payment for the right to speak freely, to gather freely, to be presumed innocent in their dealings, to be safe in their homes.

Perhaps on this day, mindful of yesterday’s sad anniversary, the blood shed at Columbine, Aurora, Newtown, and Littleton is too high a price to pay for some, if not all the guaranteed freedoms. Perhaps the blood shed cries out for some regulation, some restriction or curb on what Americans deems to be their freedoms.

One question is this: Whose freedom is at risk here? If Mr. and Mrs. Smith go to a movie theater, shouldn’t they have the freedom to come, go and stay as they please with reasonable expectations for their safety?

The invisible social contract every person enters into with every other person, made manifest in a country’s laws and the authorities empowered to enforce those laws, says “yes.” And yet a shooter killed how many people in a theater in Aurora, Colorado.

Shooting his guns, his many assault weapons, that man, deranged or not, caused a tragedy that will be marked by one more sad anniversary.

Another question is this: If little Maggie goes to school, shouldn’t she have the freedom to do so with reasonable expectations for her safety?

The invisible social contract made manifest in a country’s laws and the authorities empowered to enforce those laws says “yes.” And yet shooters have killed how many people in schools in Newtown, Connecticut and Columbine, Colorado.

What has Congress done about gun control in the past year? Nothing. What can Americans then expect? The same thing. What happened Friday? Another school shooting.

One can’t be obtuse about it. The prose is simple, but the problem is complex. Simple prose won’t make this a simple problem.

The various elements involved are like the revolving plates of a Rubric’s cube. Just when one thinks there’s a solution, something goes wrong on the far side of the cube.

The elements are these: Guns, mental health, the Second Amendment, big business, influence peddlers,  an increasingly overwhelmed public and a sub-culture of ritualized mourning, intended to comfort, but so devoted to form and process that it threatens to leech the energy necessary for the impetus to make a change.

The fact that most of the shooters were teens or young men and mentally ill is a concurrent and coincident problem. Mental illness and deadly weaponry make for an explosive combination. Of course not all persons who suffer some form of mental disease are violent, but obviously some are.  Perhaps whatever regulation might be prescribed for the purchase and sale of guns would also account for the buyer’s mental health.

It sounds reasonable and drafting the law would be a manageable task, but how would one then implement and enforce such a law? Will we expect retailers in the gun industry to be trained and educated in ascertaining a customer’s mental health? What happens with the person who is in fact ill, but has yet to so diagnosed?  This is how a problems gives birth to more problems.

The NRA would like most Americans to believe that they are an institution like any other think tank with the noble intention to protect 200-year-old language set forth in the Constitution and the Bill of Rights. The NRA works very hard to dispel the image that they are just a bunch of “suits” in an office in a skyscraper, with feet up and boots on a glass desk, leaning back in high backed chairs like J.R. Ewing. The NRA doesn’t want us to think that their job, 24/7, is to plot how they can manipulate all those impassioned gun buyers out there to scare hell out of the boys in D.C.

The Second Amendment has always been interpreted broadly. For 100 years, America was a primarily agrarian society. On the farms and the prairies men, women and even children needed guns for protection and food, for maintaining their bit of civilization in a wild and open country. On the anniversary of Newtown one senses the disconnect between an obviously troubled young man shooting his guns and assault weapons at children and the necessity for pioneers and farmers to have a gun on the open land.

The Founding Father’s, products of Rousseau, Voltaire and the Enlightenment, were so wary of regal power and a government’s potential for the arbitrary exercise of total power, that they also wanted to afford average citizens the right to maintain armed and local militias. It’s a lofty and even admirable proscription, however, it also shows its age. The imperative fails to translate to modern times.

Imagine the following: Joe Citizen is determined to fight against the oppressive Federal Government. He hooks up with several like-minded men to car pool south. The feds get word of the Joe Citizen Insurrection Militia. They call in the drones and the stealth fighters and a few tanks and about a million men in cammo to meet Joe and his armed militia on the Beltway. Result: Feds 1, Joe Citizen’s Insurrection 0. Somehow the language allowing for armed militias does not translate well to the modern scene.

The very nature of modern weaponry, the weapons of today that would intrigue Franklin and amaze Washington, pose another question regarding the Second Amendment. Does the provision for an armed militia mean that a next door neighbor needs an altogether too powerful military-jargon-Oliver-North- signature-model-automatic-reloading-firearm with night scope and guided destination system to hunt rabbits on the weekend? Common sense alone notes the disconnect.

When a problem raises so many “disconnects” it usually means that the on-going debate has been framed by arguments that fly above the real issues at stake – arguments that are meant to misdirect attention.

In the final analysis, as with most problems in America, both the cause and proposed solutions to America’s gun problem reside in the receipt and expenditure of money.

One doubts that the NRA is manned by constitutional law scholars determined to uphold a conservative strict constructionist viewpoint. One might try to imagine Wayne LaPierre as a constitutional scholar so threatened by any assault on the purity of the constitution’s language, that he and his minions have spent their time and money for purposes of tradition and scholarship.  But, one will fail. Obviously this whole thing is about the money. The money made with the sale of guns, the money made with the sale of assault weapons. The money made as a by-product of the influence bought and paid for. The money trend made in dues and other fees, the money made as a consequence of power, the money from being able to influence the passage and to block the passage of legislation.

It’s not about constitutional freedoms or regulations on sales of guns or the devastating micro event, the shooting, itself. It’s not about the senseless killings, marked by candles, stuffed toys and anniversary gatherings. In the worst possible way, it’s not even about Newtown and Aurora or Columbine, no matter how much they dominate the public’s attention until the next thing comes down the pike.

It’s about the money and the NRA should own up to that fact and leave the flag and the precious vellum documents out of it. Perhaps then an honest and fair negotiation might take place to deal with the complexities of a many faceted and divisive state of affairs.

The late Senator Daniel Patrick Moynihan of New York once cast the problem in this light. He said to forget the guns. The country doesn’t have a gun problem; it has a bullet problem. Regulate the manufacturing and sale of bullets and watch what happens then.

3 Responses to "Newtown – Shooting Guns and an Anniversary"