With Week 14 of the NFL 2013 season about to go into full swing on Sunday, positions for the playoffs  are beginning to solidify for fans and all the teams fighting for a spot. A handful of teams are on the cusp of being in, while another handful of teams are now officially out of playoff contention for the year. The division leaders became obvious earlier in the season. In the AFC, the Denver Broncos are projected as 1st seed at 10-2, with the New England Patriots a close 2nd seed at 9-3.

The Broncos first loss of the season came at the hands of the Indianapolis Colts lead by second year quarterback Andrew Luck. There was an enormous build up to the game, as it was the first time since his release that former Colts quarterback Peyton Manning returned to the stadium his leadership made possible. Manning’s loss at the hands of his replacement was a hard-fought battle and proved Luck was a genius pick by Colts owner Jim Irsay.
However, that genius was tempered by the fact that Manning himself told Irsay that he was “crazy” if he did not take Luck in his absence.

Their second loss to the New England Patriots was another 60-minute war that ended in overtime with a Patriots field goal. The Patriots’ earlier losses to the Cincinnati Bengals (13-6, Week 5), the New York Jets (30-27, Week 7) and the Carolina Panthers (27-17, Week 8) put them behind the Broncos in the playoff race. Neither has clinched a spot but this Sunday’s games should crystallize positions for the division leaders.

The Broncos are scheduled to host the Tennessee Titans (5-7) this week, a team in the hunt for a playoff spot. The Patriots are playing the Cleveland Browns (4-8), also trying to muscle their way into post-season play. Losses by either or both the Patriots and Broncos would not knock them completely out of playoff contention; it would simply diminish their chances at a bye or home field advantage. For the Browns and Titans however, a loss puts them closer to the final curtain call for their 2013 season.

Outside of these two teams, we have the AFC Wild Card contenders. This is comprised of teams that may or may not move forward into the playoffs. It all depends on wins and losses this Sunday and next.

The Indianapolis Colts hold the best chance for 3rd seed in the AFC. Their 8-4 record puts them ahead of the 9-3 Kansas City Chiefs, projected 4th seed, and the 8-4 Cincinnati Bengal, projected 5th seed, because of divisional wins and losses between the three teams (see table below). The reigning Super Bowl champion Baltimore Ravens round out the AFC Wild Card teams with a surprising projection of 6th seed at 6-6.

With Luck at the helm of the offense, the Colts have put up impressive numbers and won games they were expected to lose since the young quarterback slipped on the horseshoe emblem. Luck fully established himself and his team as serious contenders for the playoffs with Indy’s victory over Manning and the to-that-point perfect Broncos, but another team fell to the Colts that popular thought did not expect.

The Colts are the only team to beat the Seattle Seahawks (34-25, Week 5) this season. They solved a puzzle no other team has managed to crack against the 1st seeded NFC team. That win put them in the mix for playoff contention and the victory over the Broncos cemented it. As long as they are in top form against the Bengals this Sunday, they should continue their march into the postseason.

The Chiefs are bewildered as they try to work their way back from a third loss in a row. Manning and his Broncos handed the last undefeated team in the league their first and third losses of the season. In between, the Chiefs managed to fall to the 5-6 San Diego Chargers, 41-38.

Quarterback Alex Smith is still careful with the ball and continues to read the coverage as well as he did in the beginning if the season. Looking at the Chiefs’ wins and losses and Smith’s stats for each game, there is no glaring stat that jumps out to explain why KC is suddenly getting handed marks in the “L” column. Over the course of these three losses, Smith was sacked a total of six times by Denver and San Diego. He threw 2 interceptions over the three-game losing streak, and only fumbled once. Whatever is going on with the Chiefs, it is not their quarterback.

In recent weeks, KC has seen injuries at key positions. On defense, linebacker Tamba Hali has been dealing with an ankle injury and his counterpart, Justin Houston has been dealing with an elbow injury. Between them, these two combine for 20 of the Chiefs 34 sacks. Hali has been in full practice this week, but Houston has not practiced and is listed as out. On offense, Donnie Avery, who has been so effective throughout the season, is probable with a shoulder injury. He has been in full practice and he is listed as probable.

Running back Jamaal Charles still leads the Chiefs in rushing and receiving yards and has not slowed his stride. He has 219 carries for 1011 yards and nine touchdowns; on receiving he has 55 catches for 452 yards and two touchdowns. Of four fumbles he has only lost two all season.

The Chiefs have not won since their bye in Week 10. This week, they are on the road to face the Washington Redskins. Considering the recent debacle that is Washington, KC probably has a chance to get back on the winning side of things on Sunday. The trick is staying there. If the Chiefs recapture their mojo, they can come out of the Wild Card race with a playoff berth.

The Bengals are one of the surprises of the season at 8-4. They were the first team to beat the Patriots this season (13-6, Week 5) and they did beat the Colts in preseason, 27-10. Quarterback Andy “Red” Dalton has wide receivers A. J. Green and Marvin Jones to work with. Together they have 14 receiving touchdowns. Dalton also has running backs Giovani Bernard and BenJarvus Green-Ellis, who are carrying the running game in impressive fashion. Between them these two workhorse players have scored all eight of the Bengals rushing touchdowns.

Filling out Dalton’s arsenal are tight ends Jermaine Gresham and Tyler Eifert, each contributing two and one touchdowns to the scoring drives respectively. There’s also wide receivers Brandon Tate, Ryan Whalen and Mohammed Sanu, each with significant catches and scores. Green (groin) and Eifert (knee) are both probable with injuries this week but both were in full practice on Thursday and Friday. Offensively speaking, the Bengals could not be more prepared to make a run for the playoffs.

Defensively, they lost their captain, defensive tackle Geno Atkins in Week 9 to injury as well as cornerback Leon Hall in Week 5 for the year. Their replacements are holding firm, of course, but as banged up as the Bengals defense is, they may have some trouble with the Colts energetic offense. The other side of the Atkins coin is linebacker Vontaze Burfict, who is dealing with an ankle injury. Like his offensive teammates, he was in full practice and is listed as probable.

As long as the Bengals can pressure Luck and keep him unbalanced they have a chance to advance. They also need to capitalize every offensive opportunity with a score. The Colts are far too good at getting the lead and keeping it to depend on a last minute comeback.

The Ravens were effectively “gutted” on offense and defense after their Super Bowl win last season. Emotional and defensive leader Ray Lewis retired. Safety Ed Reed moved on to the Texans and then the Jets. Running back Ray Rice has had perhaps the most lackluster season of his career, and quarterback Joe Flacco simply has not recaptured that same magic that ran him 11 games without an interception last year. 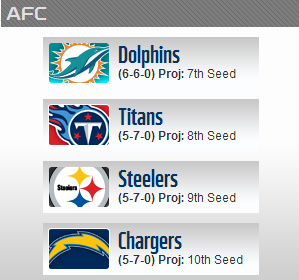 The Ravens were devastated on opening day by Manning’s record-setting seven touchdowns in a loss that it seems they have not yet recovered from (49-27, Week 1). Their wins have been sporadic and their play spotty. No one is quite sure why the Ravens are not running the table on the teams like the Buffalo Bills (L 23-20, Week 4) and the Cleveland Browns (L 24-18, Week 9), except to say that they have become unfocused. The fire that drove them to the championship has burned low and it may not flare back soon enough to lift them past .500 and into serious postseason contention.

This week they play the Minnesota Vikings (3-8-1), who are on the verge of elimination from the playoffs. With quarterback Christian Ponder back in charge and firing on all cylinders and running back Adrian Peterson on pace to match last year’s numbers, the Ravens may be closing down their season far sooner than they expect this year.

The list of teams that are definitively Out of playoff contention is clearer, at this point, than the In list. As of today, only one AFC team has been eliminated from playoff contention. Holding a disappointing record of 2-11, the Houston Texans are no longer in the race.

They are playing now for pride and draft picks. With their 11th loss on Thursday Night Football to the Jacksonville Jaguars (4-9), the Texans front office decided to release Head Coach Gary Kubiak. General Manager Rick Smith sat beside owner Bob McNair at a press conference announcing the end of Kubiak’s 8-year run with Houston on Friday.

As they finish up the last three weeks of their “nightmare season” the Texans will be under interim Head Coach Wade Phillips. Speculation on who will step into Kubiak’s vacated spot is already running through the league. Names like former Chicago Bears’ coach Lovie Smith (2004-2012) have been thrown around, but McNair has not specifically named anyone except Phillips and Smith at the current time. Whether Phillips will remain as head coach or step aside and continue as defensive coordinator is also a question that remains open to speculation.

The remaining contenders are all fighting to survive another week. They are listed in projected order of rank as of Week 14 and sorted by win/loss record in the table. Each of the teams  “In the Hunt” is facing almost certain elimination this week or next week according to their schedules. They must win or go home.

For the AFC, the playoffs are still up in the air. The divisional leaders are almost guaranteed to go forward in the playoff race but they still need to win. All the Wild Card teams are jostling for position and are in must-when situations. None of the teams are in or out for the AFC as yet, but this week’s games should shuffle out the chaff and further reveal the final cut for the playoffs.