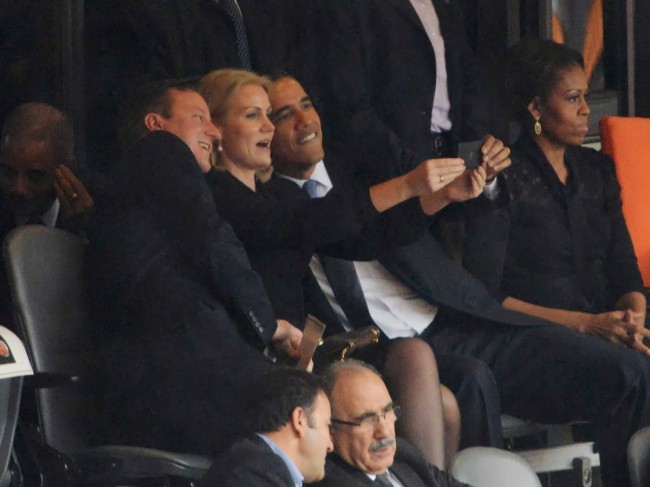 The tact factor is up to the reader when it comes to this story; during the Mandela memorial, interesting pictures released of President Obama chatting it up with the Danish PM. A selfie between the two political figures were snapped as Michelle, seemingly, glares at the interaction.

Leaders from around the world gathered in Johannesburg to honor the memory of Mandela. Many leaders had words of praise for Mandela, Obama shared his own thoughts, calling him a “giant of history.” The mood was somber, but encouraged smiles and connections as leaders joined in one stadium over a man known as the symbolism of reconciliation.

It seems for some, the connection was too good to miss. The Danish PM, Helle Thorning-Schmidt was all smiles as she greeted Obama. Michelle seemed withdrawn as the two leaders shared a laugh. Ole’ buddy Brit PM, David Cameron was happy to partake in a selfie, when Thorning-Schmidt whipped out her smartphone. Obama leaned in and the political sandwich beamed for the screen.

Except there was a fourth person and she wasn’t happy. Michelle Obama seems to be issuing a glare that can be interpreted as the maternal “we are at a memorial, what are you doing?!” or that from an upset wife, who is none to pleased to see her husband crack an enormous smile for a overseas pal. Check out the pictures, they speak for themselves.

Notably, there is a mood change as something occurred away from the watchful eyes of the camera and Michelle is seated firmly between Obama and the Danish PM. Was it separating the misbehaving “children” or asserting a clear sign to the pretty PM that Obama was hands-off?

Consider the factors (without laughing), this was a great time for Obama to show a side with fellow leaders of interactivity. After all, when can anyone expect Cameron to be ready to photo bomb a selfie next? Already, countless and countless of social media captions have hit the airwaves. Many contemplate the various thoughts stewing inside Michelle Obama’s head, to exactly what was Obama thinking to laugh it up at the Mandela memorial.

While many are considering the selfie a disgrace, many more are contemplating if the screen actually reflected a picture Thorning-Schmidt was sharing with the President and British PM. Many have even jumped in offering suggestions that the Danish PM could have been sharing a picture she took with Mandela. For now, it seems the selfie angle is what everyone is deeming the smiles to be.

Others found the interaction between the world leaders to be disrespectful during a memorial, but it was also several citizens of Johannesburg that came to the defense of the grinning trio. One Facebook comment alluded that citizens of South Africa celebrate death with singing and dances of joy, as a reflection of Mandela’s legacy. The various aspects right now are just social media fodder until some confirmation is provided by one of the three participants.

Further yet is the questioning glare from the First Lady. Was she merely scolding her husband internally for communicating during the memorial, or was it something more?  For now, the Obama selfie is a social media wonder that was shared during the Mandela memorial. Did the picture sharing earn Obama a glare from his wife. If so, how chilly will the environment be tonight in the White House? Thoughts or suggestions on the matter? Was it tacky, harmless or just a anthill blown into a mountain? Share in the comments.