Pope Francis the Coolest Pope of All Time?

By Kimberly Ruble on December 3, 20133 Comments 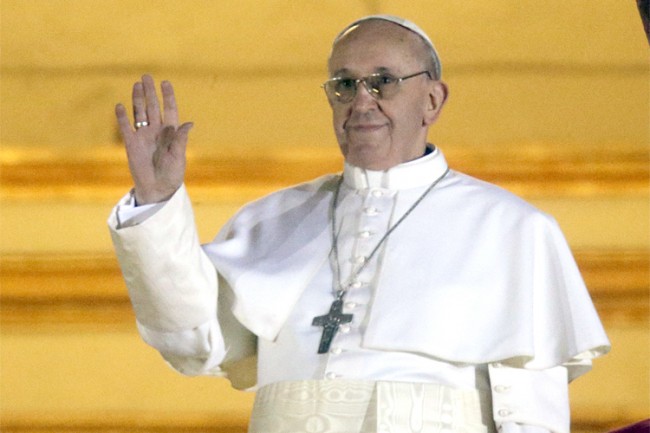 Pope Francis has been nicknamed the coolest Pope of all time due to various reports over things he has done. With the latest antics he has reportedly pulled, he is helping to keep that name.

He has reportedly removed his trademark white uniform which would effortlessly identify the man as who he really is, the leader of the largest religion in the world. However, rumors began that Pope Francis had supposedly taken to dressing as a regular priest and was going along the streets of Rome in order to give aid to the homeless he encountered.

These reports started in November after the Archbishop Konrad Krajewski, who is the Vatican Almoner, only gave a dry smile when he was asked if the Pope had joined him during his duties of giving out alms to the Roman poor.

But through a source at the Vatican, it has been confirmed that the rumors are accurate and that the Pope is continuing to take on a task that he began while he was a cardinal back in Buenos Aires.

The anonymous source stated that Swiss guards have acknowledged that Pope Francis has gone out at night, dressed only as a normal priest, to meet up with men and women that are homeless and provide them with help.

Since he took over as the pope from Benedict XVI back in March of this year, Pope Francis has been constantly in news headlines all over the world because he does not follow the usual tradition.

Pope Francis put up a selfie he made when he was with some young Italian pilgrims that showed up at the Vatican earlier in the year. He also prefers to drive himself around in a used car instead of being driven around in the security rich papal limo.

He has permitted small children to go through set security lines and whisper words into his ears. He also touched the face and body of a man who was severely disfigured.

Pope Francis also just let it be known to the general public he was once a nightclub bouncer in Buenos Aires. With this information, it shows that even the pope has a past.

He explained that while he was a student, he served as the doorman to the bar who kept undesirables outside from the bar.

By doing that, it does give an opposite view of the man who has been in the public eye in the past few months. But it does show that along with the man who is going against Vatican papal tradition, he also is human. He has numerous sides to his personality. It has even been reported that before he became a priest, Pope Francis had a girlfriend and that he enjoyed doing the tango on the dance floor.

In other times past, Pope Francis was both a psychology and also a literature teacher.

But his most dedicated stance in the world today continues to be helping the poor and homeless. His commitment just shines through when he removes his white pope outfit and goes out at night like he does. When he does wear the pope uniform, instead of putting on the customary scarlet slippers and gold cross, he chose to wear a simple iron cross and older black shoes, which were back from his days in Buenos Aires.

From finding out about his past and present, Pope Francis just might really be the coolest Pope of all time.