Recycled Orchestra – If This Doesn’t Make You Cry, Nothing Will 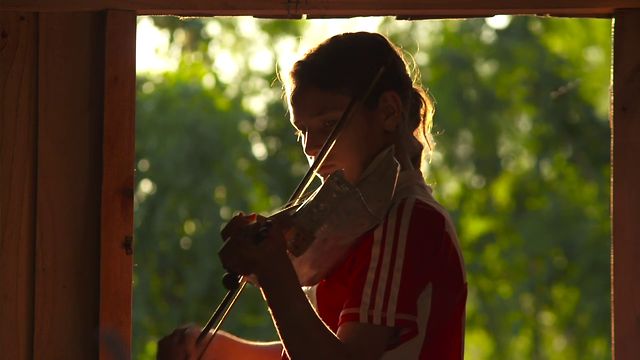 “The world sends us garbage…we send back music.” That is the slogan of the Landfill Harmonic, an orchestra from Paraguay whose instruments are all made from recycled junk.  In the poverty-stricken community of Cateura, on the banks of the Paraguay River, the residents live on top of a humongous, steaming pile of waste. 1,500 tons of it is dumped anew every day. The people who live there survive by picking through, recycling, and trying to sell the stinking rubbish. Sometimes they get as little as 20 cents a bag for it.

In this most miserable of environments, polluted, unsafe and unhealthy, has sprung up a remarkable and awe-inspiring story of hope and redemption.

Favio Chavez, a worker on the landfill site, also happens to be a musician. One day, it occurred to him, that at his feet, and amidst the rubble, he had the means to transform lives. He could do that by fabricating instruments from the ordure around him, and teaching the children how to play. From the scrap heap, he has conjured beauty and joy. He started by using his own instruments, but when the students were queuing up and he no longer had enough to go around, he saw the potential in the chaos.

Amid all the rotting heaps of aluminium and plastic Chavez began to see something else. He saw violins, guitars and cellos. Oven trays and oil barrels to him were worth more than gold. Actual instruments would have been too valuable. “A violin is worth more than a recycler’s house” he has explained. Making them from the refuse however, meant they had no monetary value.

Chavez, 37, started at the site as a technician in 2006. He was there to help classify the refuse. At the weekends he went home to Carapegua, fifty miles away, where he conducted a youth orchestra. When he brought his group to perform at Cateura, parents begged him to teach their children too.

He began to experiment with the materials in the garbage. Necks for string instruments could be sculpted from strips of wood, among all the flies and the overpowering stench were materials which could project sound,which could withstand the precise tension needed to create the reverberations. He now uses the recycled instruments to teach over 70 children a week and combine their talents into an orchestra that has already been on a world tour.

Jorge Rios, 35, is a ganchero (recycler) with two daughters now playing in the orchestra. He admits to his initial scepticism,”A violin can’t feed you” but concedes that, “my kids have seen new countries. They have an opportunity for a better future.”

The orchestra has played this year in Amsterdam, Argentina, Canada, Palestine, Norway, Japan and the US.

Jorge’s girls are Ada and Noelia Rios. They live in a shack with earth floors on the San Cayetano slum. Noelia is 13, her guitar is made from two discarded tins from a popular sweet potato pudding. Her sister Ada, 14, says, “Going to other countries has opened my mind so much.” Ada plays on a violin made from an old paint tin. To her, she says “it’s a treasure.”

The transformative power of music is captured in so many ways by the makeshift orchestra. In 2014 they will commence another world tour. They still don’t even have a building to rehearse in, but they have determination. And talent.

One Response to "Recycled Orchestra – If This Doesn’t Make You Cry, Nothing Will"