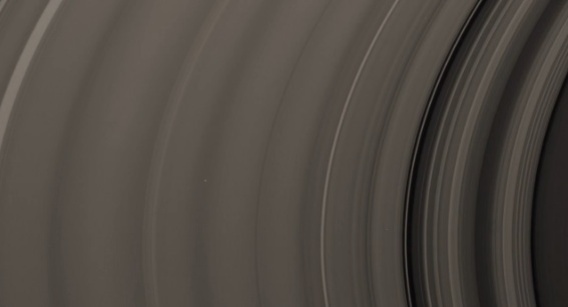 It appears that Saturn might have a new moon emerging from its rings. Images that have been taken by a NASA spacecraft are showing some sort of disruption located near the edge of the rings. It is believed that is being caused by a concealed object moving around the bands of ice. Because this is occurring, it is thought that astronomers might have witnessed the birth of a small moon.

It had formerly been believed that Saturn’s rings could also create moons. The material which was located on the outside ring edge might clump together and mature into an object big enough to stay together under the weight of its own gravity. The newly formed moon would then travel away and end up becoming another satellite for Saturn. This process is most likely how the ringed planet had created the large family of small moons which orbit near to, and also inside the rings. However, this is the first time that creation of any moons has ever been seen.

Carl Murray, who is located at Queen Mary University of London, and numerous contemporaries were examining several photographs of the small moon Prometheus, which had been taken by the Cassini orbiter, the NASA spaceship. While looking at an image that was taken on April 15 of this year, they happened to see what appeared like a distortion inside the A ring. This is the ring that on the extreme outside of the planets shiny, thick rings.

Murray stated that he had never seen anything quite like it at the edge of the A ring.

He began looking through older images of the A ring, and discovered nearly 110 pictures of the distortion that had been taken since June of 2012. There were dozens of similar shapes, all looking like airplane propellers, and they were sighted deep with the A ring. Astronomers believe those are the trace pattern movements which were left by moons too tiny to be seen, but that are plowing through the rings. Murray decided to name the strange object Peggy, in honor of his mother-in-law, because he had analyzed its first detection on her 80th birthday. Peggy might be a new moon which is starting to tug at the edge of the A ring.

Matthew Hedman, who works at the University of Idaho in Moscow, and is one of the Cassini imaging team members stated that even though no one could actually see the object itself, they could discern where it was moving around ring material, and that was something they could see.

It is unfortunate but scientists might never learn the true fate of the object. Murray has not been able to find the little bright spot in the most recent pictures sent back that have just been taken of Saturn’s A ring. It is very possible that the blossoming moon has been suddenly destroyed in some sort of cosmic collision. But it is also possible that Peggy went on to become a full-fledged moon and so it has moved on, going too far away from the ring to be perceptible. The small moon would be less than a kilometer in width, so if it has gotten away from the A ring it most likely is too small for Cassini’s cameras to be able to see.

Hedman stated that even if no one ever sees Peggy again, the tiny moon has already left a giant mark. The Cassini team wants to now begin searching for related objects located near the edge of Saturn’s rings in the upcoming months. They hope they will be able to find more moons getting ready to emerge. It is not clear if Peggy is really unique or not, but it is very special. It is a possible new moon that emerged from the rings of Saturn.