Vaginal Knitting: Meet the Woman Who Knits With Her Vagina

Casey Jenkins is an Australian performance artist who has spent 28 days knitting with wool that she has placed inside her vagina. She calls the exhibit Casting Off My Womb, and it has been made public on YouTube for the world to enjoy–or not. Art, it would seem, takes many forms.

“I’m spending 28 days knitting from wool that I’ve inserted in my vagina,” Casey says in a plain, matter-of-fact tone one would not expect from someone who puts wool in her vagina for four straight weeks. “Everyday I take a new skein of wool that’s been wound so that it will unravel from the centre and I stick it up inside me… and then I pull out the thread and knit.”

The purpose of the piece is to question the taboos surrounding the vulva. This kind of feminist art is not new, in fact it comes about 40 years late. Feminist artists in the 1960s began to question sexuality and gender, and have also placed foreign objects in their vaginas as a form of art. For example, in 1975 American visual artist Carolee Schneeman produced a 35-inch scroll from her vagina and read from the document. This became part of the inspiration behind the off-broadway show The Vagina Monologues.

“If you take a good, hard look at a vulva, you realise it’s just a bit of a body,” Jenkins pontificates. “There’s nothing that’s shocking or scary… nothing that is gonna run out and eat you up.” It is worth noting that just because someone is put off or confused by the idea of vagina knitting, it does not necessarily mean he or she has an irrational fear of vulvas. 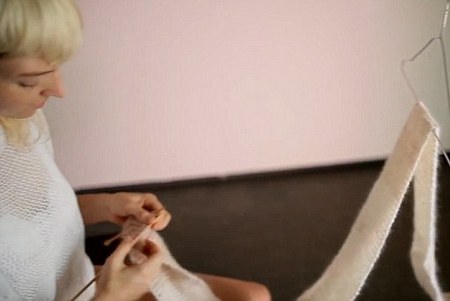 One of the strengths of the performance is that it plays with the idea that textile-based crafts are largely considered the domain of women. “By linking the vulva with something that people do find warm and fuzzy and benign and even boring… by just knitting for a long period of time, I hope that people question the fears and the negative associations they have with the vulva.”

She says that her vagina knitting is not painful. “People push babies out of there,” she reasons. “So it’s kind of… it’s a pretty robust area.”

Jenkins does not stop knitting when she begins to menstruate, and she considers this vital to her performance, even though she says it can feel uncomfortable. The shedding of the endometrial cells during this time leaves the wool sticky and brownish-red, creating a kind of physical record of ephemeral life. Earlier this year a Chilean artist, Carina Ubeda, collected her menstrual blood on scraps of cloth for five years and displayed her unique oeuvre in an art exhibition.

Jenkins belongs to a group of artists and activists–“craftivists”–called the Craft Cartel, which draws obvious comparisons to other feminist groups that have become popular in the media, such as Femen and Pussy Riot. Girls of generation Y often see feminism as a movement from their grandmother’s generation and have little room for its implementation in their lives. At a time when the feminist milieu feels inaccessible to young women, the wild popularity of this vagina knitting video could only widen this rift.

Vaginal Knitting: Meet the Woman Who Knits With Her Vagina added by K. Elsner on December 5, 2013
View all posts by K. Elsner →