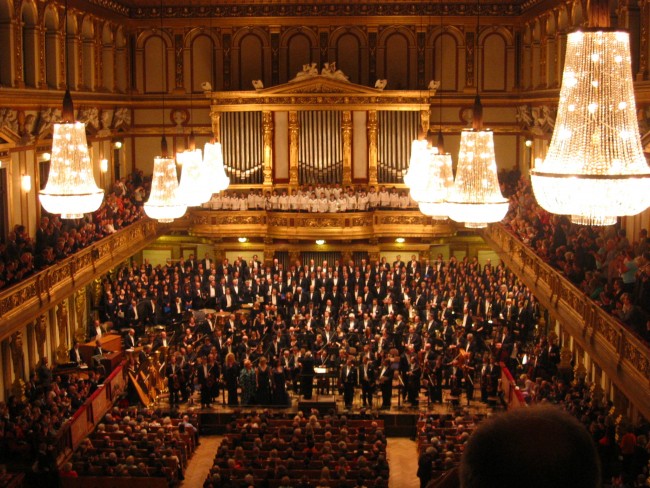 The Musikverein, Vienna, Austria’s famed music hall, is the setting for the annual New Year’s celebration given by the Vienna Philharmonic. From Vienna: The New Year’s Celebration 2014 is a traditional program, comprised mostly of Strauss family waltzes, polkas and marches. It is scheduled to be broadcast on public television (PBS) on New Year’s Day to millions of people in over 80 countries. The program will be hosted by Julie Andrews and will include performances by members of the Vienna State Ballet. Other prominent Viennese arts-related sites will be featured in addition to the esteemed music hall.

The Wiener Musikverein, frequently shortened to Musikverein, means Viennese Music Association, and is the home of the Vienna Philharmonic. It was built as the new concert hall run by the Society of Music Lovers, known in German as the Gesellschaft der Musikfreunde, on land from Franz Joseph I, Austria’s emperor from 1848 to 1916. The building is in the old part of the city, the “Inner City,” which used to have a wall around it. In the 1850s, the wall was torn down and replaced by the Ringstrasse, a wide street which encircled the area where the fortification had been.

There were two concert halls built within the Musikverein: a large one for full orchestra and a small one suitable for chamber music. The large hall, the Grosser Musikvereinssaal, had its first performance on Jan. 6, 1870. Opening night reviews were as much for the architecture, paintings and sculpture as for the music performed. One critic wondered if the lavish details of the design overpowered the music itself, but another wrote that it not only provided the “ideal atmosphere for music” but was the personification of music itself.

From the outside, the building resembles an ancient Greek temple. The main hall seats 1,744 and there is standing room for another 300. The acoustics are said to be some of the best in the world. Sculpture includes female figures over the pipe organ and balcony doors, and marble busts of famous composers who had already died before the 1870 opening. The ceiling has paintings of Apollo and the nine Muses. This artwork is in contrast to the predominantly golden tones of the entire hall.

Even though the Vienna New Year’s concert is filled with Strauss waltzes, especially those of “Waltz King” Johann Strauss, Jr., the Vienna Philharmonic did not associate with this “popular music,” at first. It wasn’t until well-known composers like Franz Liszt, Johannes Brahms and opera composer Richard Wagner showed respect for the Strauss family that the orchestra re-evaluated their decision.

They also had the opportunity to meet Strauss, Jr., when he played the violin and conducted the premiere of his waltz Wiener Blut, op. 354, for the Vienna Opera Ball in the Musikverein’s main hall, April 22, 1873. He worked with the orchestra again on Nov. 4 of that same year when he performed his Blue Danube waltz as well as works written by his father, Johann Strauss, Sr., and Josef Lanner. Over the years, the orchestra and Strauss, Jr., crossed paths and worked together. The composer died following a bout of pneumonia, June 3, 1899.

The first few decades after the death of Strauss, Jr., the Vienna Philharmonic occasionally performed his music but it wasn’t until Oct. 25, 1925, the composer’s 100th anniversary of his birth, that the orchestra played an entire concert of his music. It still wouldn’t be until four years later that the orchestra started the tradition of annual concerts of Strauss music. From 1929 to 1933, Clemens Krauss conducted these all-Strauss programs which were not held in Vienna but, instead, at the Salzburg Music Festival.

The first New Year’s Concert was Dec. 31, 1939. The Anschluss, or political union, between Austria and Germany under Hitler had already happened. Several of the Vienna Philharmonic members were Jewish and were arrested or fled the country. By having concerts of all-Strauss music during the war, many saw it as Viennese individuality.

The first broadcast of the New Year’s Celebration from Vienna, Austria, was in 1959. Since then, this annual event has been broadcast on PBS 30 times. Part of the concert is always the opening few measures of the Blue Danube, then the conductor and musicians wish the audience a Happy New Year.