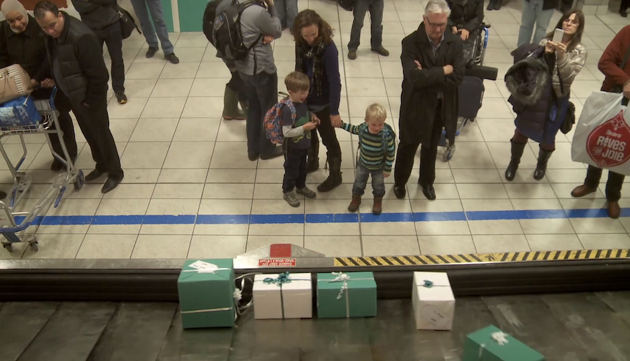 Waiting for luggage at the carousel is not usually the best part of airline travel but it was for 250 WestJet passengers in Calgary who all had Christmas come early. It was a miracle of wishes come true as weary travelers turned to teary criers in a heartwarming PR stunt.

The video of the “Christmas Miracle” has quickly gone viral.

Before leaving from Toronto and Hamilton, and after having scanned their boarding passes, those who were preparing to board the flights were surprised to see a jolly virtual Santa on the check-in screen. He asked them what they wanted for Christmas.

As they made their way on board the aircraft, 150 WestJet staff got to work as surrogate Santa’s elves.  Taking all the information from the logged desires, they scrambled off in all directions to source, buy, wrap all the gifts and get them to Calgary. It was a race against time. As the planes winged their ways, the surprise makers had their work cut out;  just as Santa does to meet their target.

On arrival the passengers, as is customary, made their way to the luggage hall to await the slow trundle past of the unloaded bags.  To their absolute amazement what started to emerge was not luggage; there was presents. All beautifully gift-wrapped and with their names on them. Whatever they had asked for is what they received.

Two year old Cohan Peltier  asked for Thomas the Tank Engine Train set. Not only did he get it, but his Dad, Matt Peltier, got his choice too; a big screen TV.

Peltier Snr’s gift was the impressice finale to the stunt, and the last to be revealed. He said if it was a flatscreen television he would cry. It was and he did.

WestJet’s boss of communications, Richard Bartrem , explained the compnay’s motivation behind the unique idea. Once they hit 200,000 views they are going to make more gifts. They will donate flights to the Ronald MacDonald charity to help families get reunited over Christmas.  As the video has already gathered in excess of one million views it looks as if many more children are going to be happy thanks to the Christmas spirited initiative.

This follows a marketing campaign in 2012 which staged a flashmob of singing and dancing elves at Calgary airport.  The upside of all this for the airline it that is reinforces their brand in a very positive light. It is also a wonderful dose of good holiday cheer.

Some people are feeling a bit sorry for the passenger who only asked for socks and underwear. It could well be a warning to be “careful what you wish for.”  It must be said that in the video he looks pretty happy though. One little kid who got an android tablet was clearly so astonished it looks like his mouth will never shut again. A woman who asked for a camera sobbed with gratitude.

It may be a clever marketing ploy, but Westjet’s baggage carousels streaming past full of Christmas gifts is a miracle those lucky passengers will never forget.

The Globe and Mail