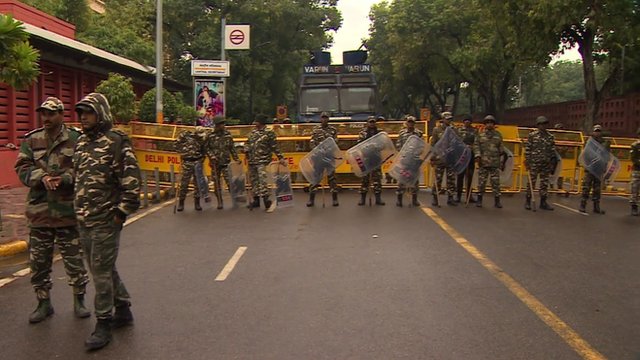 Delhi’s chief minister, Arvind Kejriwal, has ended his protest that had led to many of his supporters clashing with police. Kejriwal, along with six members of his cabinet, had been conducting a sit in protest in the middle of the city for over a day following disagreements with the federally administered Delhi police force. The chief minister was able to conduct official business during the sit in, despite causing numerous traffic issues, which included the temporary closing of four metro stations. Kejriwal had called for a ten day protest after law enforcement allegedly refused to raid a potential drug and prostitution operation within city limits. Around 1,000 supporters joined the sit in, which subsequently resulted in a large police presence in the area. Multiple clashes between police and protesters broke out and dozens have reportedly suffered injuries.

Kejriwal, leader of the Aam Aadmi Party (AAP), has been calling for Delhi’s government to take control of the city’s police force. Because Delhi is the nation’s capital, the federal government currently has authority over police. Arvind Kejriwal came to power pledging to fight corruption and violence, especially against women. The spontaneous protest manifested after police refused a request by Kejriwal to investigate an accusation against four alleged Ugandan prostitutes. Kejriwal was then prevented from going to the residence of Indian Home Minister Sushil Kumar Shinde where he allegedly planned to demand the removal of several police officials who had failed to act. Kejriwal also cited other grievances against the police force as reasons for the sit in, including its recent handling of a gang rape case involving a Danish national.

Dozens were injured while attempting to break through police barricades to join the protests. Many in the city of 17 million loathe the police due to widespread allegations of bribery and abuse and viewed Kejriwal’s sit in as a larger protest against police misconduct. Police intervened in order to try to control the situation and stop it from spiraling out of control. Few arrests were made and the mass of people dissolved after Kejriwal claimed victory.

The protest encampment was near the main route for India’s Republic Day parade, which will take place on Sunday, and police had contacted Kejriwal and informed him that police would resort to expelling protesters by force if they had not left by then. In hopes of pacifying tensions, Home Minister Shinde stated that two police officials involved in the possible mishandling of the prostitution case were put on leave pending an investigation. However, Mr. Shinde ruled out the possibility that Delhi’s police would be removed from federal control.

In an address to the crowd of supporters, Kejriwal said “We will continue our efforts to make Delhi police accountable.” Kejriwal vowed to persist that Delhi itself be in charge of the police in order to change the manner in which they operate. The ended protest was highly political and highlighted the difficulties Kejriwal’s administration and the federal government have with one other. Kejriwal, a self-proclaimed anarchist, won elections partly due to his harsh critique of the federal government’s monopoly of power in Delhi.