By Donna Westlund on January 29, 2014Comments Off on Atlanta Snow Jam 2014 and Its Aftermath [VIDEO] 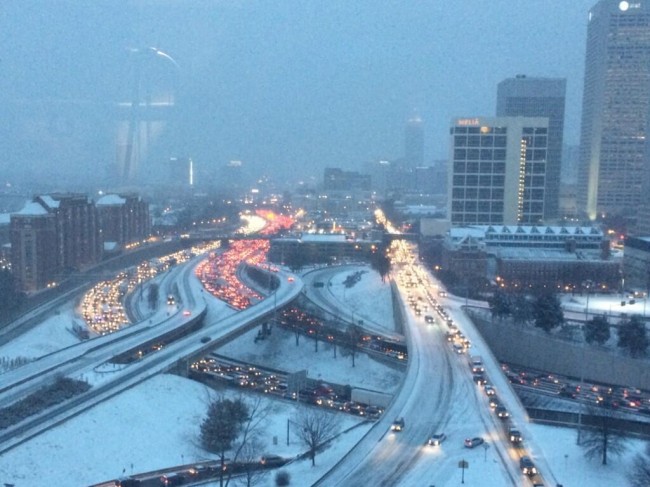 A rare winter storm passed through the Southeast and Gulf Coast on Tuesday, dropping 1-2 inches of snow, ice, and sleet on the city of Atlanta, Georgia. By noon, there was about half an inch on the ground and schools decided to call it a day. Commuters likewise left their jobs for home after lunch. This resulted in a mass exodus that, when combined with drivers not used to driving on icy roads nor in snow, created horrendous gridlock on highways surrounding the city. In the space of about 30 minutes, many key freeway traffic flow indicators went from green to red, signaling traffic had ground to a halt.

By early evening, Georgia Governor Nathan Deal had declared a state of emergency in all 159 counties of the state. Some of those in the traffic jam who have since made it safely out have told tales of monster commutes that lasted 20 hours. Georgia State Governor Nathan Deal said that 18-wheeler trucks had jack-knifed on several roadways and that this greatly added to traffic immobility.

People coped with the situation in different ways. Some drivers pulled their cars over to the side of the highway and went to sleep in the freezing weather. Many simply abandoned their cars. People spent the night at the homes of strangers and in businesses and grocery stores. Home Depot kept some of their stores open overnight for the stranded travelers. Scores of parents were not able to pick up their children, so about 880 kids spent last night at school. One woman created a Facebook page called “SnowedOut Atlanta” that has 50,000 followers. Another gave birth inside a car on I-285, the delivery assisted by a suburban Atlanta police officer.

Today, the National Guard is helping out. Helicopters took to the sky as Humvees patrolled the virtual parking lot in a coordinated search and rescue operation to seek out the remaining stranded motorists on the ice-bound freeways in order to offer them shelter, food, water, and gasoline.

As the chaos subsides, officials and experts begin to analyze what happened in hopes of creating a better plan of action when it comes to future storms. Governor Nathan Deal has noted that the storm modeling of the National Weather Service repeatedly portrayed that the primary area of the storm would hit south of Atlanta, so agencies did not dispatch resources to Atlanta earlier because it was thought other parts of the state would need them. He also acknowledges that some of the local meteorologists predicted the storm center more accurately, at 50 miles north of where NWS modeling indicated it would be.

Atlanta Mayor Kasim Reed said that local businesses should have staggered the release of their workers, instead of letting them all leave at the same time; however, he also pointed out that many of the motorists who were stranded were on interstate highways, and that those are maintained by the state. He noted that one million people were able to get out of the city, that there were no deaths. He also said that roads remained cleared to all the city’s hospitals and police stations.

This type of weather situation is rare but not unheard of in Atlanta. In 2011, a storm dropped 4-6 inches of ice and snow on the city and shut it down for five days. As a result of that storm, Atlanta bought a fleet of 40 snowplows and 30 spreaders (vehicles that apply sand/gravel/salt to the roads). On Tuesday, they had 700 tons of mix on hand and began placing it on priority route roadways at 7:00 am on Tuesday.

One life-long Atlanta resident opined that no amount of planning or money would do much to thwart a situation that rolls around on average once a decade, especially when you combine it with a mass transit system that could be a lot better in a city that continues to grow and expand suburban sprawl-style in all directions.