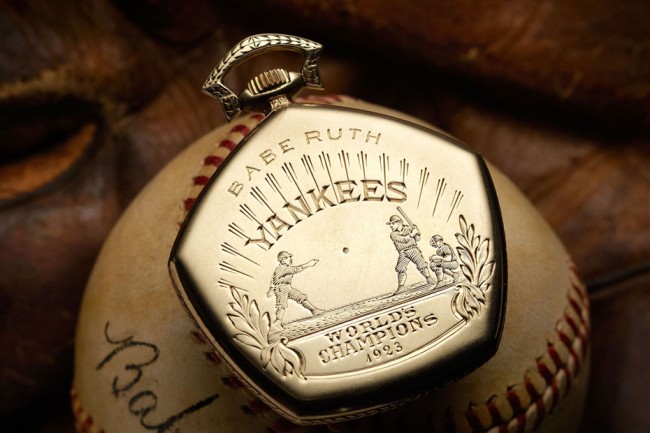 The 1923 champion pocket-watch given to Babe Ruth after winning the 1923 World Series, a once believed long-lost gem, has incredibly made an appearance at a New York auction, and it is here that the watch is expected to receive at least $750,000.

The watch was given to Ruth following the Yankees championship win over the New York Giants in 1923. What adds to the watch’s value is the fact that 1923 proved to be an essential turning point in Yankees’ history as the franchise won its first of twenty-seven World Series at the new Yankees’ stadium. Another reason that the World Series watch is expected get at least $750,000 is due to the phenomenal performance put forth by Ruth during the series. In six games against the New York Giants, Babe Ruth had a batting average of .368, including three home runs throughout the series.

The World Series watch belonging to Babe Ruth is a golden pentagon-shaped pocket watch, and considering its history, it should have no problems receiving $750,000 from the right bidder. The piece was made of 14 karat gold, and it is rumored that the watch remained on Ruth’s person until shortly before his death in 1948.

Nowadays winning teams receive golden rings for a championship win. However this tradition replaced the previous one in which teams received golden watches. So, the winner of the auction will essentially have the equivalent of Babe Ruth’s championship ring. In addition, it is his very first championship award. Needless to say, the watch is very significant to the history of baseball, which is why the watch should easily reach a seven-figure sum in exchange for the piece.

Further adding to the specialty of the watch is the customized engraving on the watch. Ruth’s name is engraved on the watch, and in addition has the etching, “For my buddy Charles Schwefel.”

The anonymous seller of the watch told sources that he had received the watch at a price in the ballpark of 200,000 dollars. It is the intention of this anonymous buyer to use the money that he receives for the watch in order to make a donation to a very charitable cause.

It is planned that this historical watch is going to be auctioned at the Heritage Auction located in New York City on February 22nd.

When speaking on the matter, Chris Ivy, who is auctions sports director for an auction house located in Dallas commented, “This is a truly remarkable piece, considering it comes from the start-up moment for the most dominant team in baseball history. The culture was forever changed because of this team, and Ruth, as the majority of sports fans know, was the leader of that team.” Ivy then went on to further elaborate on the watch itself when he stated, “In addition, no one has even known as to where this piece had been, with the exception of the seller that is. It had for so long been thought to have just been another long-lost gem. It is truly a very significant historical piece.” By this time next month, it will be very interesting to see if the World Series watch belonging to Babe Ruth gets more than the $750,000 that it has been appraised at.