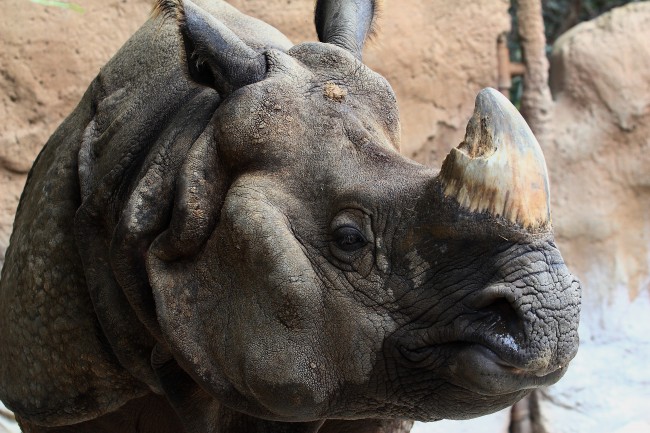 The black rhino is making sure the Dallas Safari Club stays in the news today, and under fire.  The Texas group,  which sparked a firestorm by auctioning a license to hunt an endangered African rhino, is finding itself the target of international criticism from animal rights groups.  The conservation group raised $350,000. This is nowhere close to the $1 million it had hoped to raise.

Black rhinos are just one of the species the group’s website says it helps to conserve. The Dallas Safari Club says it aims to conserve wildlife and wilderness lands, and that it contributes hudreds of thousands of dollars for this purpose. According to the organization’s website, its primary purpose is to educate both young people and the general public. The organization also seeks to promote the rights of hunters worldwide, as well as protect those rights.

Critics have said any hunting of a rhino sends a bad message to the public.  “This auction is telling the world that an American will pay anything to kill their species,” Jeffrey Flocken, North American regional director of the Massachusetts-based IFAW, said earlier this week. “This is, in fact, making a spectacle of killing an endangered species.”

Poachers long have targeted all species of rhino, primarily for its horn, which is valuable on the international black market. Made of the protein keratin, the chief component in fingernails and hooves, the horn has been used in carvings and for medicinal purposes, mostly in Asia. The near-extinction of the species also has been attributed to habitat loss.

Since the black rhino doesn’t have natural predators, the biggest threat is poachers.  The rhino’s horn can bring up to $60,000 per pound, making it’s value somewhere between cocaine and gold.

Efforts have been made over the years by various groups to get the Namibia government to stop issuing the black rhino hunting permit.  In a country where per capita income is less than $6,000, it can be difficult for a country to raise so much funding so quickly.

The auction was held Saturday night in downtown Dallas.  Because of death threats, the auction was held under extremely tight security and behind closed doors.  Guards stationed at each entrance screened attendees at the door as protesters, holding signs and chanting, gathered outside.  The Humane Society and the International Fund for Animal Welfare lent their voices to the others speaking out against the auction.

The Dallas Safari Club was provided the permit by the Namibian government.  While Namibia has auctioned off similar hunting permits in the past, this is the first time such a permit for black rhinos has been released outside of the country.

Traveling from Atlanta to protest the auction was Jim and Lauren Ries and their two children.  According to Jim Ries, the children were the moving force behind traveling to Dallas to participate in the protest.

The family is passionate about animal conservation.  Their initial foray into conservation programs involved working with cheetahs in Africa.  Their non-profit program, One More Generation, was set up to help adopt cheetahs, another endangered species.

The auction missed its goal by almost two-thirds, raising only $335,000 out of a hoped for one million dollars.  The number of protests and bad publicity the auction received on social media was to blame, according to organizers.

According to several reports, Dallas Safari Club members were targeted with angry messages and death threats in the days before the auction.  “It appears to be an orchestrated series from people who are strongly anti-hunting,” one member said.

Claims by the Safari Club that the auction was the greatest way to have the largest impact on increasing the black rhino population were met with derision by conservation groups.  Calling the intent of the auction “perverse” and a “sad joke,” protesters feel that sacrificing one animal for the greater good is a non starter.

The highest bidder, Corey Knowlton, is on edge as he waits in a Las Vegas hotel room.  Surrounded by a private security detail, he is explaining to a television news crew why he spent $350,000 for the chance to hunt a black rhino in Namibia.

Knowlton’s identity as the winner of the Dallas Safari Club’s auction was revealed on social media.  “You are a BARBARIAN. People like you need to be the innocent that are hunted,” posted one woman on Knowlton’s Facebook page.  It didn’t take long for other threats and ugliness to show up.

Knowlton, who lives in Dallas, is a consultant for The Hunting Consortium.  He also can be seen as co-host on a hunting themed show on The Outdoor Channel called Jim Shockey’s The Professionals.  Knowlton’s online bio lists more than 120 species that he has hunted as he has visited every continent in his pursuits of game.

The black rhino in Namibia may be in danger, but The Dallas Safari Club has no intention of backing down on this, or future, auctions for the endangered species.