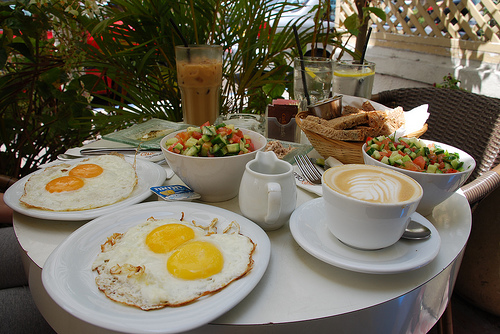 Breakfast is served. A study published online in Public Health Nutrition has reported results from an ongoing evaluation involving participants who were followed from the age of 16 years to 43. The results were reported regarding the Northern Swedish Cohort, a group of 889 people, which has been studied at 16, 18, 21 and 43 years old.

The main findings were that those young people who either skipped breakfast altogether, or drank and ate sweet foods and beverages were more likely to have metabolic syndrome as adults. Metabolic syndrome is a disorder which includes at least three of the following five symptoms – abdominal obesity, elevated blood pressure, elevated fasting glucose, high serum triglycerides and low high density cholesterol levels.

It was found that 68 percent of those participants who skipped breakfast or ate and drank sweet things only ended up with metabolic syndrome by the age of 43. The study used International Diabetes Federation criteria, as mentioned above. Poor breakfast habits were linked to abdominal or central obesity and high fasting glucose levels in those at age 43.

As the study proceeded, the 16-year-olds filled out questionnaires regarding what they ate each morning for breakfast and were given a health examination. Health examinations followed at ages 21 and 43. Other information was taken at the ages of 18, 21, 30 and 43 as well.  Even with differences between participants, such as smoking, level of physical activity and alcohol use, the study showed that those with poor breakfast habits ended up with a significant metabolic illness.

Breakfast is served. The reported findings from Umea, Sweden give a caution to those who underestimate just how important the first meal of the day is to healthy physical development.

The habit of skipping a good breakfast is prevalent both in Europe and the U.S. It is estimated that 10 to 30% of young people do not observe the morning ritual, and suffer the consequences. The studied group showed that the habit gets worse as time goes on.

Metabolic syndrome is a group of risk factors associated with heart disease, diabetes and stroke. There will be further investigations of the link between poor breakfast habits and metabolic syndrome, in order to look more closely at the connections between nutrition and illness. The American Heart Association gives more information on their website about preventing the disorder.

Christine Rosalie, on her blog, Morning Rituals, stated, “It’s not something we ever planned, this ritual of mornings, of showing up early and eating together to start the day. But it’s the thing that sets everything on course for us for the rest of the day, and gives us this: a brief and pleasant ellipsis of gratitude.”

Rosalie may be on to something that the modern age does not make easy. Teenagers who are rushing to school and find that skipping a meal keeps their weight down, or who hit snooze too often and can’t quite make it to the breakfast table are missing out. Kids who can take the time to have a structured morning meal may have better health over the rest of their lives.

Maria Wennberg, the study’s main author, is concerned that the results show that poor breakfast habits can cause significant problems with blood sugar regulation. Breakfast is served, a longtime ritual should become a healthy habit.