By Sara Watson on January 27, 2014Comments Off on Bubonic Plague DNA Found in Teeth Could Strike Again 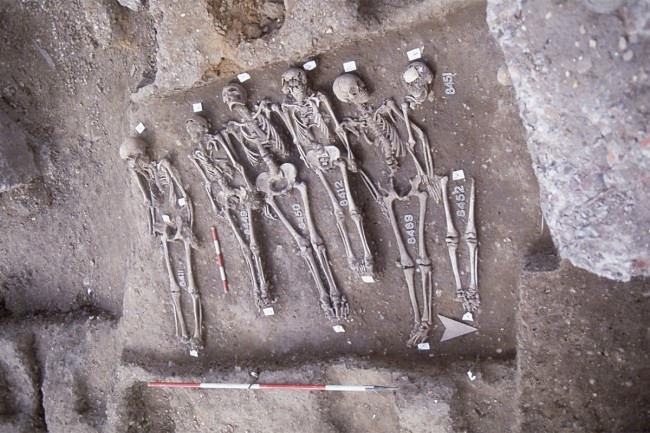 Scientists in Canada found small pieces of DNA in ancient teeth, and they are warning that another outbreak similar to the bubonic plague could strike the modern world again. The Yersinia pestis bacteria was uncovered in the teeth of two skeletons that were buried at the time of the Justinian outbreak in Iron Age Germany. The bacteria could be behind two of the deadliest pandemics in history. It is known as the cause of the bubonic plague, or Black Death, that decimated large numbers of the populations throughout Europe in 1348. It is also suspected to be behind the Justinian plague in the Roman Empire, so called as it appeared during the reign of Emperor Justinian in 541 AD.

Researchers have analyzed 12 skeletons from a cemetery in Bavaria. There were 10 found with low levels of the bacteria and two which had enough in the teeth to be extracted. The remains were dated at the time of the Justinian outbreak, judging by the distinctive beads that were placed around the necks of the women buried in the cemetery. This dates them to 525-550 AD, right at the beginning of a plague that wiped out one-quarter of the population.

The team hopes to better understand by sequencing the entire DNA strand. Leading scientist, Hendrik Poinar, who works at McMaster University in Canada, states that although they cannot say with absolute certainty that the bacteria is the complete cause of several deadly outbreaks, its presence in the teeth is certainly a factor. This is backed up by similar elements of the bacteria that were discovered in a mass grave of victims from the 1348 bubonic plague in London.

The bacteria are commonly found in small rodents and their fleas. When these creatures cohabitate with humans, the likelihood of infection increases. Researchers were able to match the bubonic plague causing DNA found in the teeth to common creatures such as rats, thus proving that a modern epidemic could strike again.

This is no news to small regions such as the island of Madagascar, where inhabitants frequently come into contact with a form of plague. For most of the world, improved hygiene and new drugs keep such problems at bay. Although there is no shortage of antibiotics in the region, some of the higher, more mountainous areas are harder to access. Rates of infection rise during the hot rainy seasons, typically between April and October. Epidemics are frequent in isolated poverty-stricken areas where often literacy and information about the disease is low. Symptoms of the plague include gangrene, swollen lymph nodes and indications of flu. When treated death rates drop to 15 percent, however, without antibiotics, mortality can occur within 24 hours of infection.

Poinar says he believes that scientists need to be monitoring rodent populations. That way, they can check if any large numbers are dying off which may be an early indicator of a plague virus. The research recently published in The Lancet Infectious Diseases Journal could help early prevention of an outbreak. Thanks to the DNA found in those teeth, the world could be ready in case the bubonic plague strikes again.