By Donna Westlund on January 26, 2014Comments Off on Chicken Processed in China May Be First Step to Something Far Worse 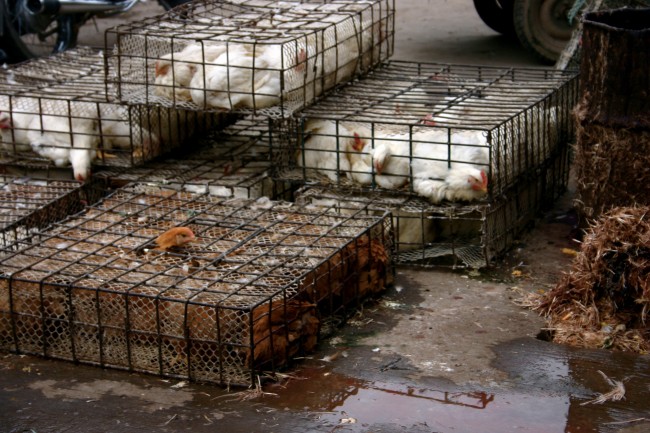 The recent outbreak of the H7N9 subtype of the avian influenza virus raises anew concerns that were originally expressed last year, when the USDA ruled the United States was allowed to process its chicken in China. Others may not have felt any concern. Both are right.

Firstly, the virus: It can only be transmitted through close contact with bird droppings and live birds. It is rarely spread by human-to-human contact, and there is only a small risk of contracting it from eating eggs or chicken that has not been fully cooked. And with cooked poultry, there is virtually no risk.

Secondly, the USDA ruling: The birds must be born, raised, and slaughtered in the United States. China will process, fully cook (to at least 165.2 degrees Fahrenheit), and return the chicken back to the U.S. There is zero risk, then, for contracting the avian flu from chicken processed in China.

Lastly, we are not processing much–if any–chicken in China yet. By summer, though, consumers in some states could very well be eating nuggets that were processed 6,000 miles away. They will probably never know it because for chicken that the U.S. processes in China, there is no “country of origin” labeling requirement.

Related to all this, however, there lurks an issue that is cause for concern. Many prognosticators think last summer’s ruling means that China has got its foot firmly in the door that will eventually lead to selling their chicken in the U.S. However, if the USDA ever allows that, then those who eat Chinese chicken will likely be exposing themselves to any number of health risks. China is not nearly as industrialized as the U.S. It is years–even decades–away from having a system equivalent to the USDA. Up to 90 percent of the food produced in China comes from tiny backyard producers, which makes it extremely difficult for the Chinese government not only to develop but implement a food safety system that can track the many small farms that are spread over thousands of miles.

This lack of a food safety system is the origin story of all Chinese food-related tales of horror: rat meat sold as lamb, 46-year-old chicken feet, tainted baby formula that sickened 50,000 babies and caused four deaths, the death of 600 U.S. pets–mostly dogs–from chicken jerky treats, and 12,000 pigs, dead for reasons unknown, floating down a river leading into Shanghai. On the other hand, industrialized farming in the U.S. cannot be held up as a paragon of food production either. In fact, China has had a ban on American beef since 2003.

Allowing China to process U.S. chicken has been perceived as the first step to allowing chicken raised (and then processed, of course) in China to be exported to the U.S. Many people see a quid pro quo in the offing: China will lift the ban on U.S. beef, and the U.S. will lift the ban on Chinese chicken. The demand for chicken in the U.S. is higher than the supply, especially in California. It is one of the main reasons so little chicken is being sent to China for processing. Cheaper chicken from China might be very tempting to fast food chains. Also, what is to hold the U.S. back from importing chicken from China when it is already importing 82 percent of its tilapia fish from there, where it is usually raised on a diet that consists solely of chicken and pig feces?