By Cynthia Collins on January 20, 2014Comments Off on Claudio Abbado: Opera and Symphonic Conductor Dies 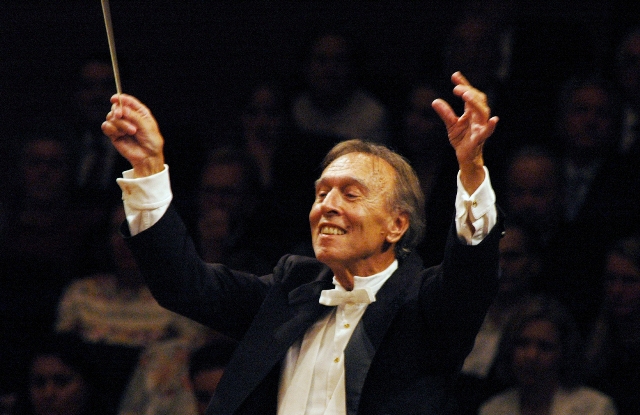 Claudio Abbado, one of the great conductors of opera and symphonic works throughout the world, died Monday morning at his home in Bologna at the age of 80. The exact cause of death was not given but according to a spokeswoman for the Bologna mayor’s office, Abbado passed away at 9 a.m. following a lengthy illness.

This popular and personable conductor was born in Milan, June 26, 1933. Even though his family was musical, he was not attracted to music until the age of eight when he attended a performance at Milan’s La Scala opera house. After that experience, he emerged from his own description as a “withdrawn, lonely child” to having a passion for music and politics. His father, a pianist and violinist, was his first teacher. His mother, also a trained pianist as well as a children’s author, took in a Jewish child during World War II to protect against Italy’s Fascist government.

His mother ignited his interest in politics. As a young boy, he used graffiti to show support for Bela Bartok, the Hungarian composer whose music was banned in Italy. Later on, he would take music into the Italian factories. Throughout his life, no matter how many illustrious concert halls and opera houses he served, he was just as well-known for setting up youth orchestras in the poorest slums of Cuba and Venezuela.

His training took him from Milan to Vienna where he studied as a pianist and conductor in the mid-1950s. While there, he auditioned for the Musikverein Chorus, singing under the conductors, Herbert von Karajan and Bruno Walter. In 1958, he traveled to the United States to work at the Tanglewood Festival in the Boston area and won the Serge Koussevitsky Award in conducting. Five years later, in 1963, he won the Dimitri Mitropoulos Competition in conducting which had a cash prize of $5,000 and a 12-month position as the assistant conductor of the New York Philharmonic under the direction of Leonard Bernstein.

He had been having health problems for years which eventually resulted in stomach cancer surgery in 2000. La Scala had invited him to conduct two concerts in 2010 in honor of his 50th anniversary of his conducting debut. It would have been his first appearance at the opera house in 25 years but those concerts were canceled due to illness. Despite poor health, he worked on a production of Mozart’s The Magic Flute with his son, Daniele. He also revived the Lucerne Festival Orchestra and had them perform Gustav Mahler’s Third Symphony at the 2007 BBC Proms — a series of daily classical concerts held during eight weeks in the summer at London’s Royal Albert Hall. He continued to spend two months out of the year with youth orchestras in Venezuela.

President Giorgio Napolitano of Italy had appointed the conductor a senator for life just last year. Upon hearing of his death, he said Abbado had honored Italy’s “great musical tradition” throughout Europe and the entire world.

Claudio Abbado will be remembered for many things including the youth orchestras he founded, the respect he gave and received from the world’s finest opera and symphonic musicians and his ability to conduct entire concerts without using scores. The Berlin Philharmonic posted this statement on their website in reference to his death: “His love of music and his insatiable curiosity were an inspiration to us.”