Earth Is Colder Than Mars 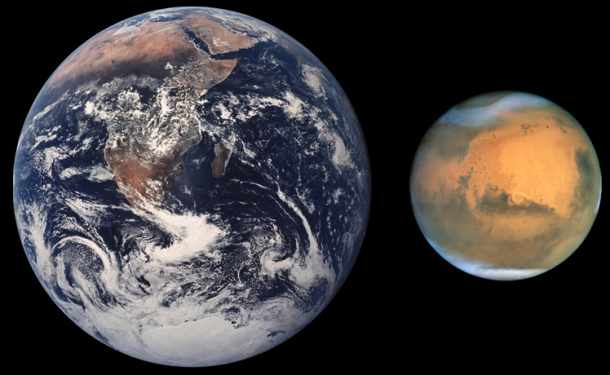 Cold weather is hitting places in North America so hard that regions on Earth are actually colder than what some of the average daily temperatures are on planet Mars. In northern Minnesota, the temperature has dropped down to a staggering -42 F. The reason behind such frigid temperatures, more of which are coming downward toward the eastern states over the next few weeks, is a mass of extremely cold Arctic air pushing to the south.

In the upcoming week, the coldest days in the Midwest will be Monday through Wednesday and then in the East it should be Thursday through Saturday, with temperatures in both areas of the country struggling to rise to the zero mark. The highs will be only in the single digits or the teens.

Speaking of Mars, about 200 million kilometers away, NASA’s one ton sized, nuclear power robot rover Curiosity has been traveling over one of Mars’ craters. Measurements from its Rover Environmental Monitoring Station have been coming back to Earth ever since soon after the rover arrived on the Red Planet in August of 2012. Data has only went up to Dec. 20 and 21 as of right now, but over the past month, REMS has sent back the daily high temperatures and they have ranged from -24 degrees up to -13 degrees Fahrenheit. With this information that Curiosity has sent, -24 degrees Fahrenheit has been the coldest daily high temperature that it has experienced since it hit Mars surface.

But to look at everything fairly, the entire Red Planet is still much colder. It must be remembered that the Curiosity rover is moving around inside in a crater at about the same latitude equivalent as where Venezuela is on Earth.

On Tuesday of last week, many news feeds read that the temperature was colder in Winnipeg, Minnesota, Earth at -30°C than in a crater on Mars which was -29°C and that ended up causing quite a stir. But for people living in Winnipeg, it would get even worse.

That morning low temperature was the coldest day Winnipeg had seen or felt in over 80 years. It was -37.9°C. When a person takes the wind chill into account, that made it feel like it was -48°C. So in the far northern parts of Manitoba, the wind chill caused it to feel like it was as cold as -53°C.The weather was so frigid that even flights were cancelled citing safety concerns.

However, up on Mars, Curiosity was experiencing daytime high temperatures at as a moderately balmy -29°C.

The Red Planet can experience temperatures that become even warmer. During what is considered Mars’ summer months, the daytime highs might reach 20°C. However, at night, and during the winter months, it has been recorded that Mars can have temperatures drop to as low as -150°C.

All these enormous swings in temperature are due to the extremely thin Mars atmosphere, which makes it comparatively easy to cause the surface to heat up but it almost makes the Red Planet very difficult to trap any heat as well.

But if hot planets in the universe are what one is looking for this time of year, there is always the planet Venus. The daytime highs there usually reach at least 464°C.

Regardless, the cold weather here on Earth is still so frigid that it is actually colder in different regions than what some of the average daily temperatures are on planet Mars.

12 Responses to "Earth Is Colder Than Mars"