Francois Hollande Separates From First Lady for the Other Woman 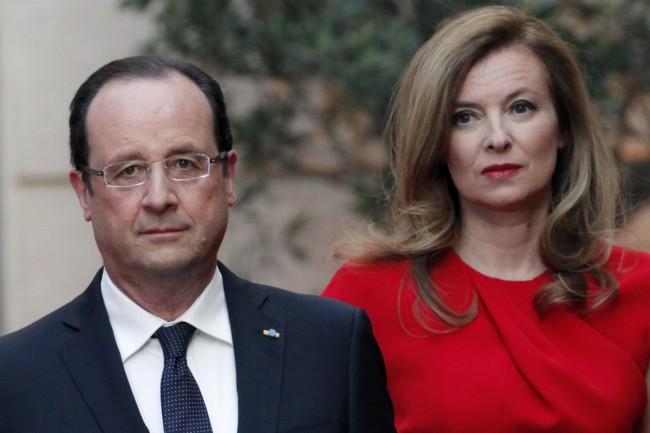 Francois Hollande has decided to separate from the first lady, reportedly for the other woman in his life, actress Julie Gayet. The French president announced the separation via Agence France-Presse, but soon after speculations regarding the reason of the separation surfaced. Hollande’s affair with Gayet was exposed on January 10, but anonymous sources mention that the first lady was not the one who asked for a break-up.

Before announcing that he will separate from Valerie Trierweiler, the French president openly spoke about the hardships of a relationship during a press conference. “These are painful moments, but I have one principle: that private matters be dealt with private,” Hollande said.

The separation became clear not only after Hollande’s public declaration, but also after the first lady tweeted her first reaction.

“All my gratitude goes to the extraordinary staff at the Elysee,” Trierweiler said. She also mentioned that her departure from the office she received when she became the first lady was full of emotion. Unnamed sources claim that Hollande decided to separate from the first lady for the other woman, but the settlement was put off because Trierweiler did not want to abandon her relationship.

Both Hollande and Trierweiler are highly unpopular when compared with other French presidents and their life companions, but reports show that the recent scandal has deepened the dissatisfaction with regard to the president’s image. Also, the former first lady’s trip to India is breeding another wave of disapproval, because French people consider that she should not represent their country anymore.

“There is no doubt about her coming,” an official from Action Against Hunger said.

However, the official also mentioned that the charity was “working on different assumptions,” which allowed the press to speculate that Trierweiler’s plans might change.

Although a palace press officer told reporters that Hollande will not announce his separation, the French president made a public statement shortly after his staff denied the rumors in which he acknowledged the fact that his “shared life with Valerie Trierweiler” has come to an end.

After the separation, the former first lady moved into La Lanterne, a luxurious presidential palace along with her mother and other family members. The small group enjoyed a heated swimming pool and a well-stocked wine cellar, despite the fact that Hollande is a declared socialist who does not like the rich.

Anonymous sources claim that Hollande separated from the first lady for the other woman, actress Julie Gayet, whose rumored relationship with the French president has been interfering in Hollande’s duties. A news conference meant to reveal the economic plans was dominated by the president’s private life, as well as Hollande’s trip to Rome.

Speculations regarding the fact that Hollande separated from the first lady for the other woman still dominates the press, but a recent poll made by Ifop reveals the fact that the president’s private matters have not influenced the voters’ opinion about him. However, the publication which first broke the news about Hollande’s affair removed the report from its website, Gayet sued Closer magazine for breaching “French privacy rules.” No further comments have been offered by neither Hollande, nor Trierweiler.