Honeybee Colony Collapse Could Be Reversed by Science 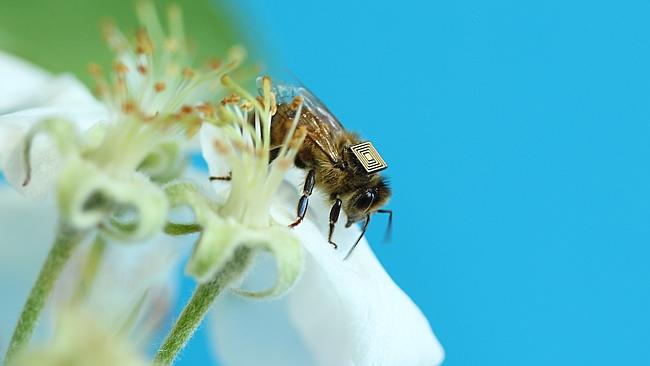 Australian scientists are refrigerating thousands of honeybees and fitting them with microchips in an attempt to solve the mystery of honeybee Colony Collapse Disorder (CCD). If successful, the global decimation of honeybee colonies could be reversed by science.

The ambitious “swarm sensing” project is a joint venture between the Tasmanian Beekeepers Association, the University of Tasmania, and the Commonwealth Scientific and Industrial Research Organization (CSIRO).

Honeybees are taken from their beehives on a daily basis and chilled so that that the scientists can safely attach radio frequency microchip sensors to their backs. They are then released so they can return to the hive.

CSIRO science leader, Dr. Paulo de Souza says the research is important internationally “because the world is worried about bees disappearing.” Even though Australia is one of the few countries not affected by CCD, honeybee populations have declined by up to 30 percent – a similar percentage to that experienced in the US.

An exciting new technology that hasn’t been used anywhere until now, Dr. de Sousa says the swarm sensing project will enable them to better “understand ecology and the relationship among the species.”

Bees follow a set routine, and operate according to “a very predictable schedule.” If their behavior changes, this will alert the scientists to possible changes in their environment.

The fact is that more than 30 percent of our food supply is reliant on pollination, which makes us highly dependent on honeybees. This is why efforts are being made worldwide to uncover the reasons for the reduction in honeybee populations and honeybee Colony Collapse Disorder.

The single most likely cause of CCD is pesticides, particularly neonicotinoids which are a type of systemic pesticide that works on insects’ nervous systems, paralyzing and killing them.

The chilling fact is that neonicotinoids are a billion dollar business and are mostly used to treat seeds that are sold both for agricultural and garden use.

In April 2013, after campaigning for over two years, an international petition generated by Avaaz (meaning voice) was instrumental in banning “bee-killing pesticides” (including neonicotinoids) in Europe for two years. This means that if the honeybee Colony Collapse Disorder has a chance of being reversed by scientific research, the next 14 months will be critical for the European farming community.

Honeybees and CCD in the USA

Attempts to ban pesticides in the US have so far been futile, even though the United States Department of Agriculture concedes that CCD is “a serious problem.” They also state that CCD threatens both the health of honeybees and “the economic stability of commercial beekeeping and pollination operations” in the US. But rather than ban pesticides, the Department’s Agricultural Research Service (ARS) has introduced its own studies to try and uncover any possible causes of CCD. The Department is also encouraging farmers to improve their “bee management practices”.

A study undertaken by the US Department of Agriculture and University of Maryland scientists, and released mid-2013, positively linked chemicals to the death of honeybees in managed colonies. They found 35 pesticides and high loads of fungicide in the pollen sampled. In one sample the concentration of certain insecticides was higher than the “median lethal dose”. Ultimately they warned that it was essential to pay more attention to how honeybees are “exposed to pesticides outside of the field in which they are placed.”

Whatever the cause, this study shows that in winter last year the US honeybee population declined by an alarming 31.1 percent. Some beekeepers were reported to have lost entire bee populations. The fear is that a single “bad” winter could “trigger an agricultural disaster.”

In a leading initiative that could become a model for other US states to follow, North Dakota has developed a pollinator plan that is aimed at protecting honeybees and improving cultivation practices farmers should follow. Although non-regulatory, it is seen as a “balanced public policy that reduces risk to honeybees.”

For more than 10 years North Dakota has been the leading honey-producer in the US. In 2012 there were more than 495,000 honeybee colonies from which 34.2 million pounds of honey worth $64.6 million was produced.

According to Agricultural Commissioner Doug Goehring, the plan was developed in response to a number of problems. While honey production is thriving in North Dakota, beekeepers struggle to keep their colonies healthy. CCD is also a major problem. “Reducing honey bee exposure to pesticides is ideal. Our hope is to achieve this,” he says in the introduction to the North Dakota Pollinator Plan that was published last month.

However the plan itself states that its goal isn’t to eliminate or ban pesticides, but rather to create awareness of the problems and find solutions. It does though advocate a significant reduction of “pesticide exposure”.

While the Australian swarm sensing project could have an impact on honeybees in the rest of the world, its significance will depend on new discoveries that relate to honeybee Colony Collapse Disorder. No doubt scientists all over the world will be watching closely to see whether the swarm sensing project provides them with any data that will enable them to reverse CCD through science.

One Response to "Honeybee Colony Collapse Could Be Reversed by Science"