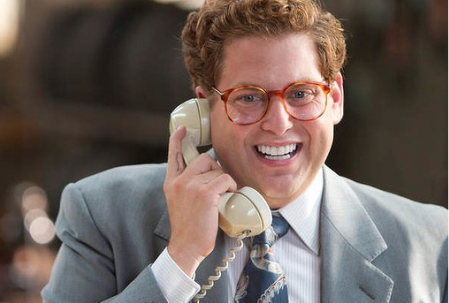 Jonah Hill is having a Driving Miss Daisy deal, just without Morgan Freeman or Jessica Tandy. Admittedly, the story sounds great at first. 30 year-old actor/writer/comedian is so desperate to work with the legendary Martin Scorsese, and Leonardo DiCaprio, that he agrees to work for scale. After taking a huge cut to his salary, he is then rewarded with an Oscar Nomination for Best Actor in a Supporting Role.

Sound familiar? If it does, it is because it’s an old story. Variants of Hill’s story have been around since Frank Sinatra had his fall from grace early on in his “bobby socks” days. In the Hollywood equivalent of sitting around a campfire, patrons of watering holes across L.A. have sat around the bar and told of these great motivational stories.

Back in the old days, when Sinatra was still the shape of a string bean, he fell out of favor; for various reasons and no one wanted to book him. Then along came James Jones’ From Here to Eternity. Hollywood history was made when Sinatra was hired to play the doomed Angelo Maggio. Legend has it that Frank was so desperate to work on the film version of Jones’ popular book that he offered to do it for free.

That particular Hollywood tale ended with redemption for Sinatra as well as an Oscar win for Best Actor in a Supporting Role. A similar story tells of Rat Pack pally Dean Martin who, after his break with Jerry Lewis was desperate to show he had the chops to make it on his own, took a part in The Young Lions and told his agent to tell the film’s director that he would do the part for free.

This is a recurring theme in tales of Hollywood. Jonah Hill and his Driving Miss Daisy moment sounds a great deal like these aforementioned stories, but, really it is not. Some websites have been quick to point out other highly successful actors who have done just what Hill did. Perform in a movie for much less than what they’d normally make, just to work in a high calibre production.

In reality, however, Jonah Hill has more in common with Dan Aykroyd than Frank Sinatra, Dean Martin, Brad Pitt, George Clooney, or that other Saturday Night Live alumnus Bill Murray. It is interesting to point out that Hill does have a connection with Aykroyd, and with Murray for that matter, that goes beyond the two men’s similar experiences in filmmaking.

Jonah Hill, has hosted Saturday Night Live on several occasions, between 2008 and 2014 and he is also a screenwriter like Aykroyd. Apart from writing credit for 21 Jump Street, a film in which he also starred, and he has a credit for writing a segment of SNL. So Hill and Aykroyd have a common background in comedy and writing.

Aykroyd was a regular on SNL “back in the day” when the comedy ensemble show was still very new and full of cutting edge humor. Like many other “regulars” on the show, he went on to find work away from the Saturday night studios and did very well in his endeavors. Aykroyd has worked on many films, some of which he penned himself, but, he was desperate to work on one film in particular.

The 1989 comedy drama Driving Miss Daisy was a film dedicated to showing the talents of the legendary Jessica Tandy and the master of gravitas Morgan Freeman. Dan Aykroyd actively campaigned for the small, almost nonexistent role of Tandy’s son Boolie. It was said that the SNL alumnus took scale for the tiny role, but, that he wanted to be considered for an Oscar as Best Supporting Actor.

The deal was made and by the time the end credits on the film rolled, Aykroyd had his minimum wage Oscar nomination. Not too dissimilar to what has happened in Jonah Hill’s case. While Hill has not said anything about a Driving Miss Daisy deal, where he could take home a paltry $60,000 in exchange for an Oscar nomination, but, it should be pointed out that neither did Dan Aykroyd mention his little deal either.

2 Responses to "Jonah Hill and His Driving Miss Daisy Deal"