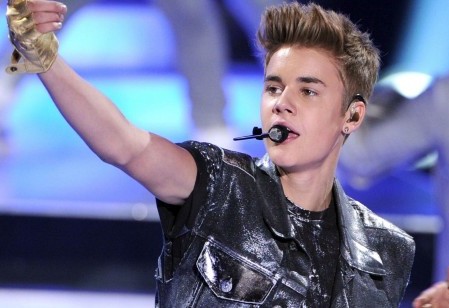 TMZ has reported that a blaggard in the Justin Bieber camp has advertised the singer’s penis pictures for sale. This traitorous ne’er-do-well is claiming that he has text messages from the 19 year-old singer sent to Selena Gomez, whom he just recently got back together with and other un-named females. This same scoundrel is also advertising that he has pictures of the singer’s genitals as well.

The website goes on to say that both the texts and the rude pictures are fake. Incredibly, this Bieber-basher has gone through a sort of broker to sell the phony texts and photos to sundry media publications. One of the texts is supposed to be a “text argument” that the Canadian singer had with Gomez.

The bogus text has Selena pleading with Bieber to listen to his manager Scooter Braun and enroll himself into rehab. The 21 year-old “older woman” also tells Justin in the text that he is sick. Other texts are in a similar vein with friends of Justin’s agreeing to stage an intervention with the singer which, according to TMZ, never happened.

The Justin Bieber penis picture that is for sale was supposedly sent to Gomez with the accompanying message of “tell me you don’t miss this.” The phony response from Selena was a “U R sick” text. Justin’s fake response is filled with expletives. “F**k you,” starts off the text and after telling his manager to do the same, as well as everyone else – “y’all” – the fake text ends with the singer claiming that Gomez is only famous because of him.

Even without insiders telling the world that these pictures and texts are fake, fans of the popstar would never believe that Bieber would act that way toward his reclaimed lady-love. Justin has been very transparent with his feelings for the Slow Down singer. The two have, allegedly, been seen together recently and their apparent reuniting negates these types of nasty rumors.

Bieber has been under investigation for egging a neighbor’s house and his “live-in” friend Lil Za was arrested during a search of the singer’s home for suspicion of possessing either MDMA and Xanax or cocaine. Although Bieber has not been connected with the drugs found in Lil Za’s room, there have been allegations that the pop star is abusing drugs, specifically a drug that goes by the name of “lean.”

Lean, which is also known as purple drank, sizzurp or syrup, among other terms, is a recreational drug said to be popular with the southern Hip Hop crowd. It is apparently a mixture of a heavy duty prescription cough syrup made up of Codeine and Promethazine combined with either Sprite or Mountain Dew. The color of the mixture comes from the purple dye used in the cough syrup.

While allegations of Bieber’s substance abuse seem to be based on the tagging of the singer’s skateboarding area in his backyard – references to a double cup with a picture of a styrofoam cup next to it is apparently code for a double dose of codeine in the lean. TMZ says that an insider has allegedly revealed that Justin likes his lean with a hard candy called Jolly Rancher.

Prescription abuse aside, there is at least one person in the Bieber “inner circle” who has turned on “his master.” Someone with a score to settle or who wants to take the popstar down a peg or two. Touting Justin Bieber penis pictures for sale that are fake, as well as the texts, is a pretty dirty trick to play on anyone. Whoever the dirty rat is, he’d better hope that he does not get found out. He may get his own texts from Bieber, telling him that he is out.