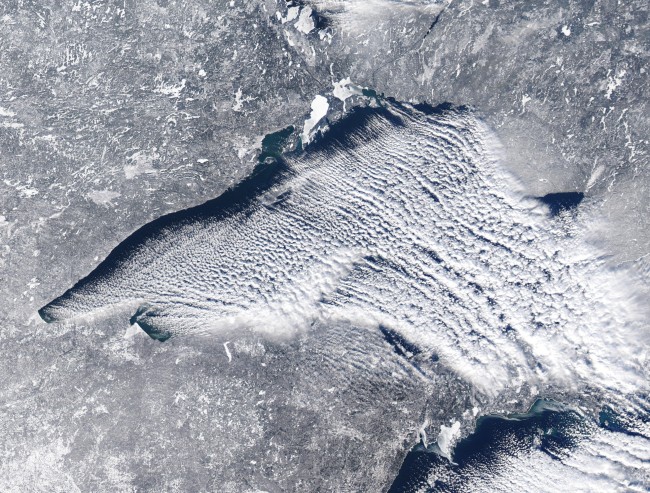 A satellite photo taken of Lake Michigan on January 28, 2014 shows heavy ice coverage, which helps experts predict higher lake levels in the future. Michigan was recently subjected to what is being referred to as a Polar Vortex. It dropped a record amount of snow on the area and brought freezing and almost unbearable temperatures to the region. With no thaw in sight, the ice coverage will continue to grow.

Combine the bone-chilling temperatures with daily sun and the result is 64 percent snow coverage on the lakes. That’s an extra 14 percent over what was recorded on the lakes just last week. The breakdown is Lake Superior at 69 percent, Lake Michigan at 46 percent and Lake Huron at 71 percent ice coverage. The most covered is Lake Erie, with 96 percent ice. Lake Ontario is the lowest with 26 percent ice coverage. The interesting part is that the percentages are so high this early in the season.

The ice coverage was documented through satellite photos taken by the Space Science and Engineering Center at the University of Wisconsin-Madison. They were able to record the images thanks to the clear, sunny skies on Tuesday. The images predict that Lake Michigan will have higher water levels once the ice melts.

A recent study by researchers at the University of Michigan and Michigan State confirmed this prediction. They evaluated evaporation and it’s effect on water level. While their focus was more on evaporation of the water than the amount of ice coverage, they state that the extremely cold winter and high percentage of ice coverage will result in colder water temperatures this summer, with a later start to the season.

Michigan lakes haven’t had this much ice coverage since 1994, when it hit a record of 94.8 percent ice coverage. The extended length of the time that Michigan has been exposed to cold air and the wind chill factor that has been 25-30 degrees below zero have changed the water. Lake Michigan is colder than usual for this time of year and the satellite photo shows heavy ice caps. By comparison, the lakes have five times more snow coverage than they did last year, which was one of the lowest levels in Michigan history.

The colder temperatures will keep the ice around well into spring, which will likely raise water levels. The water levels are expected to rise not only in the summer of 2014, but also well into 2015.

School closings and lowered production have been an issue for Michiganders over the past month. The Polar Vortex is difficult for residents and business owners in the area to get through, but the end result may be a better summer for those dependent on the lakes.

Arctic air is expected to linger in the area a while longer, according to the 10-day forecast, creating lake-effect snow. The water that’s buried below the thick layers of ice is approximately 40 degrees. Lake Michigan is expected to gain more ice coverage over the next few weeks, and could come close to the record. The satellite photo shows very little standing water as it is. The heavy ice coverage can predict rising water levels in the coming seasons.