Martin Luther King Jr. I Have a Dream Inspires the Nation (Video) 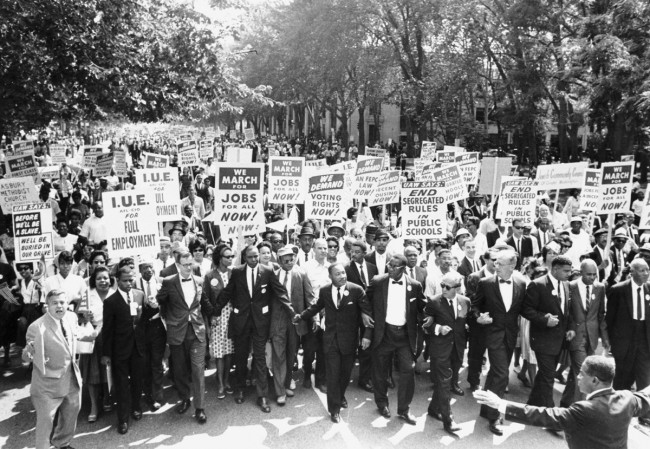 Martin Luther King Jr. was born on January 15, 1929 and he died 39 years later. He demonstrated the true aspect of an activist and spread the word with his gift of ministry. In a world of intolerance, discrimination and hate crimes, King rose above it all. He held hands with the black man, the white man – he discovered a middle ground that had been denied before. He inspired hope, promise and the creation of life with his poetic speech of “I Have a Dream.”

During King’s final parade, he felt a weariness within him. From fighting the fight of fairness. He suffered imprisonment and a life of constant threats. Yet, he marched on. On April 3 in 1968, King attended a labor strike in Memphis, and his prophetic speech still causes goosebumps down the arms of millions. King stated he had seen the “promised land” and although he might not get there with his supporters he knows “tonight” that he would get to “the promised land.” It was just the next day, King was shot and killed by a sniper bullet.

Six years prior, during an early fall day, Martin Luther King Jr. delivered one of the most powerful and symbolic speeches, in history. Never had a speech moved an entire nation, an entire world as King’s speech in 1963.

The nation has come a long way and it still has a long way to go. One could never say nothing has changed, that would be an insult of the work, the testimony and the legacy of King. It is a continued work in progress, but consider the changes within this nation during and since King’s time on this world.

In 1967 interracial marriages became legal and millions of couples enjoy loving relationships with their significant other. The nation is rapidly becoming a melting pot of races and ethnicity. The race relation questions of [] White []Black are becoming a thing of the past. This nation has blossomed to points of unimaginable destinations – due to the majority of the work King, accomplished.

This is not a day of politics or anger. It is a day of celebration – of life, of connections. Across the nation, cities are holding events in honor of the great Martin Luther King Jr. Additionally, organizations like the Corporation for National & Community Service calls this Monday the MLK Day of Service.

The labeling is based on what King once preached and the persistence of truly answering the question, “what are you doing for others?” The organization has a website (see end of article) that lists events across the nation on this day of celebration. Placing in a zip code, will lead viewers to locate events within their area that celebrate a moment of helping one another. Looking up events, this writer found a Coats for Kids event to help those in need to stay warm during the harsh elements. It is these events that allow individuals from all paths of life to connect and inspire.

Certainly, MLK, Jr. day may be a nice day off from work or school, but what good can one accomplish, even if for just one hour? King committed his life to the mission of humanity, to finding the level of tolerance, acceptance and love that was needed. He took the reigns when others wanted  a day off, or if others simply pretended problems did not exist. King took action and he accomplished so much in his young life.

Martin Luther King Jr. inspired a nation. Take this day of inspiration, of determination and mark a path of reflection.