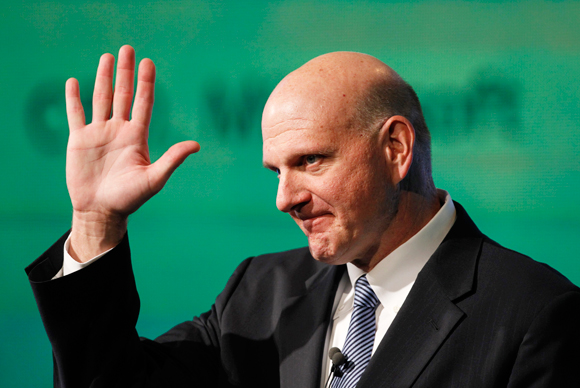 Speculation continues as to who will replace Microsoft CEO Steve Ballmer when he retires this year. Ballmer, who has lead the tech giant since founder Bill Gates stepped down in 2000, announced his intention to retire in August 2013. The change in leadership reflects Microsoft’s desire to rebrand itself as a major player in the mobile market.

Microsoft has suffered billions in losses after some questionable acquisitions and a failure to stay competitive in the exploding mobile market. Their Surface tablet has underperformed spectacularly, and while they continue to dominate the desktop computing market, they have been unable to secure a toehold in a smartphone environment dominated by Apple’s iPhone and brands employing Google’s Android operating system.

Top Microsoft investors have made it clear that they would prefer a turnaround expert take the top spot at the massive software company as it continues its efforts to rebrand.  In the fast moving world of technology, it is imperative for the company to reassert itself in the market and introduce brands capable of wooing users who have become accustomed to using personal mobile devices for their online access and communications needs.

Despite setbacks in the rebranding campaign, Microsoft is still the largest software producer in the world, and posted record profits in the last quarter of 2013. The company’s stocks and revenues climbed above projections, and they continue to flourish despite critics of their operation. They have been aided by the release of the Xbox One gaming platform, and sales of software products like Office 365.

Microsoft will be focusing on delivering its services online, changing its web office suite to Office Online, and aiming for deeper penetration into the mobile app market. After losing a court battle over trademarking with BSkyB, they are changing the name of their Skydrive cloud-storage solution to the OneDrive, and hope to announce an official launch date soon.

According to reporting by Reuters, the board had hoped to find a suitable replacement in 2013, but still has yet to announce one. It has been widely reported that Microsoft has been working its way through a list of some 40 possible candidates for Ballmer’s position.

Names that have been floated as top contenders for the CEO spot include Alan Mulally, CEO of Ford Motors, Mike Lawrie of Computer Science Corp., and Hans Vestberg of Ericsson. There have also been rumors regarding internal candidates such as Julie Larson-Green, Microsoft’s Executive Vice-President of the Devices and Studio group, and Qi Lu, the Executive Vice-President of the Applications and Services group.

A few of former Microsoft executive also appear to be possibilities, including Steven Sinofsky, former President of the Windows Division until his departure in 2012, Stephen Elop, head of the Business Division and former CEO of the Nokia Corporation, and Vic Gundotra, formerly the General Manager of Platform Evangelism and current Senior Vice-President for Social Change at Microsoft rival Google Corporation.

Some industry analysts point to Bill Gates continued presence on the board of Microsoft as reason for what is perceived as a philosophical division on the board. Similar Fortune 500 companies have generally settled on new CEOs within four to six months of announcing a search for new leadership This fuels industry speculation that the software giant is at risk for organizational dysfunction and brand schizophrenia. This perception is one of the challenges Microsoft must overcome as their search for a CEO continues into 2014.