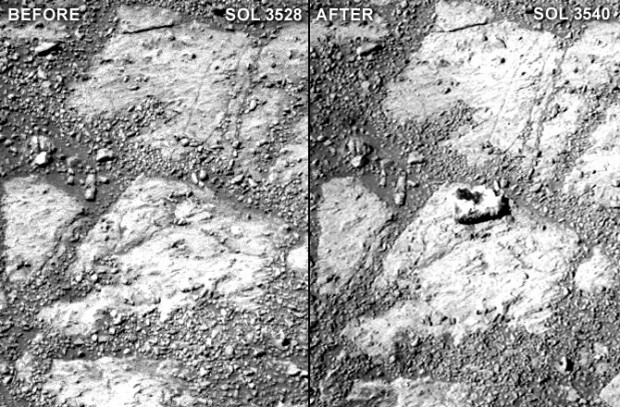 The NASA rover Opportunity has hunkered down on Mars, waiting for better exploring weather to stretch its wheels out again across the dry desert that is the planet Mars. But while it has been frozen and unmoving, NASA scientists have made a mysterious discovery, finding a rock that wasn’t there just a few Martian days earlier.

Opportunity, one of three rovers successfully sent to Mars since 2003, reportedly has not moved in over a month while it waits out the Martian weather. However, it continues to take pictures of the landscape; and in examining those recent photos, many of which are of the same location seeing that the rover has not moved, NASA scientists have discovered something interesting. One photo, taken on January 8th – or what scientists consider Sol 3536, the 3,536th solar day on Mars since Opportunity landed – shows a few tiny rocks as well as some larger ones embedded firmly in the soil. Another picture taken on Sol 3540, only a few Martian days later, shows the same rocks in the ground, but one other rock very clearly on the surface of those that was not there those few days ago. For reference, a Martian day is nearly the same length as a day on Earth but about 37 minutes longer, meaning that the two images were taken about four days apart.

Aside from the mysterious presence of the rock on Mars, NASA scientists are excited about the discovery because the rock is upside down, meaning they are looking at the underside of a Martian rock that has not been exposed to the Martian atmosphere for perhaps billions of years.

Steve Squyres, the lead scientist for the NASA Mars Exploration Rover, said that he and the team were “absolutely startled” when they saw the two pictures compared side by side and were positive that something could not be right. The team has nicknamed the rock Pinnacle Island and are currently trying to figure out where it came from. There are two front-running theories about how the fist-sized rock came to be in that specific area, seeing that the rover has yet to cross that particular path.

The first and most likely theory is that despite not having wheeled across the area, Opportunity still may have accidentally flung the rock there when it was turning in place about a meter or so from Pinnacle Island’s location. Opportunity’s right front steering actuator has stopped working and may be dragging across the ground causing shakes that could have moved the rock from a previous place. The second theory, sadly enough, is not that the Martians have finally made contact and given Earthlings a rocky welcome gift, but that the rock landed there after an unseen meteor impact shook it loose.

The area Opportunity is currently exploring is known as Matijevic Hill, near the rim of the Endeavour Crater. It contains clay minerals, which scientists believe indicates that the area might have had water billions of years ago, before the solar wind from the Sun burned off most of the Martian atmosphere.

Opportunity’s twin rover, Spirit, which was also launched in 2003, was trapped in the sand in 2010 and was used as a stationary station until March, when it stopped transmitting data. Another rover, Curiosity, was launched in 2011; and, like Opportunity, is still going strong. No doubt there are many more mysterious rocks to find and more discoveries to be made on Mars by NASA with the help of these rovers.

One Response to "NASA Discovers Mysterious Rock on Mars"