By Jim Malone on January 19, 2014Comments Off on New England Patriots Important Superstitions 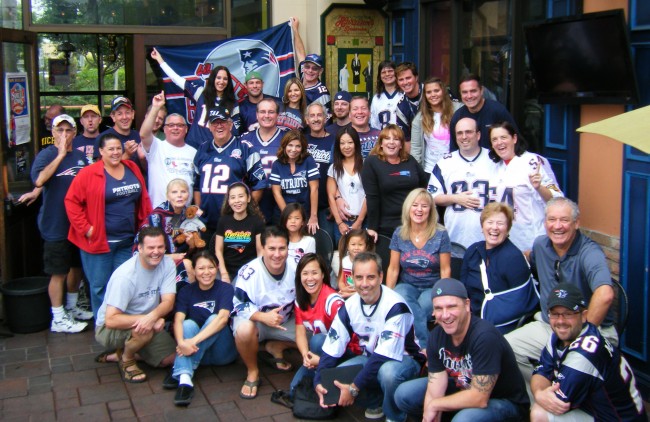 New England Patriots supporters are pulling out their lucky shirts and hats and preparing for Sunday’s showdown for a place in the Super Bowl. Across the region, fans are preparing for the game by pulling out the socks they wore last year, or shopping to make the right snacks; superstitions play an important role to the success of the team. Every member of Patriots Nation knows to do their part, no matter how weird it may seem to those looking in from the outside.

Budweiser has a popular advertising campaign that pokes fun at the superstitions of football fans. The popularity is not in the quality of the humor, but in the resonance it has with the audience. Every sports fan has a superstition. Athletes are notorious for having rituals and quirks around those unreasonable beliefs. The thing is, any one of them will confirm that it is only unreasonable if the team doesn’t win. Superstitions are born out of winning.

Nobody ever repeats what they were doing when their team lost that one time. Heaven help anyone, however, should they be snacking on a spouse’s horrible attempt at homemade desserts when the ‘Hail Mary” pass is completed to seal a victory. Friends will not only require that she make them every game, and that they be eaten, but adherence to the horrible recipe will be demanded as well. Superstitions are a serious business and, more than most, New England Patriots fans understand and respect the important role they play at playoff time.

The Boston Red Sox just won a World Series on the strength of superstitions grabbed hold of by the whole team. Indeed, even the entire city was populated for a time with bearded hopefuls, not willing to be the one who brought the jinx on the hometown team by shaving. Patriots fans are just as committed to do what is necessary to help them bring another Lombardi Trophy back to New England. By Sunday morning, things will have to be in place for everything to go smoothly against the Denver Broncos. Being an away game, special care must be taken to have the proper effect so far away.

Superstitions can be fluid. If administered improperly, the whole balance of luck may be thrown off, and a new ritual may be required to replace the one that no longer works. Every party must have a host willing to administrate these things, so it is important to identify early the person whose function will be to manipulate the luck. Believe it or not, it will go better for skeptics to go along rather than be branded a jinx. A person can quickly be turned into an island, with not a tailgate in sight willing to harbor the bringer of bad luck. In order to avoid that fate, there are some important things to remember listed here to assist.

First of all, the children must be taken care of. Superstition experts agree that children are lucky, but that luck is unpredictable if not properly channeled. Experience has shown that a child mush have an appropriate team logo displayed prominently somewhere on their body. Should someone arrive at a playoff party without following this requirement, the recommended course of action for the hosts of these parties is to have magic markers available to draw or trace the appropriate logo directly onto the offending child. Washable markers are permitted, but a penalty logo must be applied to the forehead of the offending parent in permanent marker to avoid having repeat offenders. With the Patriots only a game away from the Super Bowl, ignoring this requirement is courting disaster.

While children can get along with just the logo, adults should be held to a higher standard with respect to proper attire. There must be, according to devotees of the system, a higher level of accountability. By far, the most controversial of the rules surrounds color of garments worn. Red Patriots jerseys are borderline unlucky, and ought to be avoided if possible. Hosts will determine the level of risk they want to entertain, and decide on a case-by-case basis whether they should be banned. On game day, however, pink hats are forbidden. It doesn’t matter if they match the outfit. They may be allowed during the week when they cannot do as much damage, but on game day there is no need to tempt fate. Pink hats represent bandwagon fans with no real loyalty to the team. That spirit cannot be allowed to contaminate a successful playoff party. It is just not worth the risk.

Beyond the basic color rules, anything goes as long as it is not a division championship item from one of the years that the Patriots went to the Super Bowl and lost. That ought to go without saying, however. Less clear is the accessory rule for guests who arrive other than properly attired. Should someone be foolish enough to arrive at a party out of uniform, so to speak, the most prudent course of action is simply to send them home to fix the problem. Failing that, the host will be required to provide something appropriate to garb them. If size constraints make doing this with actual clothing problematic, some accommodations can be made. There are guidelines, however.

Blankets, throws, towels, and pillowcases may be used, but must be worn as a cape. They may not be merely draped across the legs of a person, only to be thrown off every time that person gets up. In addition, at the discretion of the host, the person wearing the cape ought to be required to perform for the party using the cape as a prop. A level of loyalty must be demonstrated to compensate for the sin of arriving without adhering to the dress code. In the absence of an appropriate cape, other Patriots novelties may be used, provided that they can be fashioned into a hat of some sort. The hat, of course, will be required to remain on the head of the offender, and the same performance requirements will apply.

Bathroom breaks, or breaks of any sort, must be regulated carefully. If someone needs to leave the viewing area, they must wait until an appropriate break in the action. Time-outs, halftime, and commercials are appropriate times to take breaks. Should a break be required, and none of those are imminent, then careful attention must be taken not to get up and leave the room while there is a play in progress. No interruption of the luck flowing in and out of a room can be allowed during game play. Snacks should be appropriately located inside the room to prevent them becoming a temptation to break the guidelines. Coolers in the living room are the best solution for procuring alcohol. If that is not feasible, this process must be monitored closely by someone who is not drinking to avoid infractions affecting the game.

Food rules are most often administered by the host, so everyone attending needs to understand that they are subject to sudden instruction to consume whatever is needed to boost luck. Sacrifices must be made. In the case of food allergy, exceptions can be made, but a dancing penalty is usually required to offset the resulting loss of luck. Special care is often required to plan the menu to minimize the allergy issue.

Heading into AFC Championship Sunday, Patriots fans have had a whole season to perfect these routines. This is the home stretch, heading toward the Super Bowl. As hosts across New England get ready to hold their most important Patriots parties of the year so far, the important superstitions are being honored across the country. With a trip to the Super Bowl hanging in the balance, there is nothing else to be done.