By Anjulina MaComber on January 28, 2014Comments Off on Pete Seeger Takes His Last Breath at Age 94 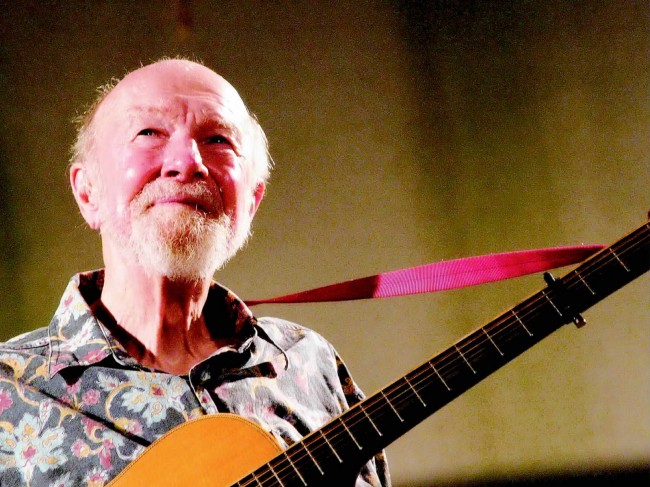 The king of folk music, Pete Seeger, passed away Monday at a ripe age of 94. Seeger was known as the father of American folk music. For decades, he was recognized for his involvement with political demonstrations and protesting. He was known to play for migrant workers and college students,  even to presidents. His grandson claimed he was active right up until his last breath, noting that just two days before his death, Seeger was out chopping wood.

During an interview in 2009, Seeger mentioned that he believed this country is not going to be saved by one big thing, but it will be saved by millions of small things. He believed that too many things can go wrong if something is too big.

For someone who never liked the term folk music, he popularized the songs We Shall Overcome and This Land Is Your Land. Seeger also wrote If I Had a Hammer and Turn, Turn, Turn. During an interview in 2009, Seeger told USA Today that folk music had been defined as “music of the peasants.”

He dropped out of Harvard University in 1938 just to ride his bike across the United States. While on his journey, he met Woody Guthrie who showed him how to jump freight trains. During the opposition to the peacetime draft in 1940, the two became a part of the left-wing Almanac Singers who sang during this time. Ultimately, the two co-founded the Weavers together whose Good Night Irene became an apolitical hit. His father, Charles Seeger, was a musicologist and he quoted him as saying, “Never get into an argument about what’s folk music and what isn’t.”

Seeger was an influence to a variety of singers including Dave Matthews, John Mellencamp, Arlo Guthrie, Rufus Wainwright, Joan Baez and even Bruce Springsteen. All of these singers performed for Seeger at his 90th birthday party back in 2009. The concert was sold out at Madison Square Garden and the money went to a local cause that was Seeger’s favorite, cleaning up the Hudson River in New York.

The night of the concert, Springsteen introduced Seeger telling the audience that he would look like their granddad who wears flannel shirts with funny hats. He went on to say that Seeger would look like everyone’s granddad if their granddad could kick a**. Springsteen claimed that Seeger at age 90 was still a stealth dagger through the very heart of this country’s illusions about itself.

Throughout his life, he opposed McCarthyism, led a few environmental campaigns and even marched next to Martin Luther King, Jr. He helped to build a sailing sloop in 1969 called the Clearwater. The boat still serves as a “floating classroom” as well as a rallying point for the cause to clean up the Hudson.

Seeger told his biographer, David Dunlap, that songs will not save the planet. He went on to say that neither will speeches or books. The folk star added that songs are sneaky because they can slip across the borders as well as proliferate in the prisons. He said that rulers should probably be careful about which songs are allowed to be sung.

Seeger does have a spot in the Rock and Roll Hall of Fame, but he is the only singer to have been convicted of contempt of Congress. He refused to testify about his previous membership with the Communist Party back in 1955. He did later say that he quit the party in 1949 but he admits he should have left much sooner than he did.

Seeger’s conviction was overturned on appeal in 1961, however, commercial TV networks continued to blacklist Seeger until 1967. Even after the blacklisting ended, CBS censored parts of Seeger’s anti-Vietnam War music including his performance of Waist Deep in the Big Muddy on the Smothers Brothers Comedy Hour.

Seeger was such a blessing to this country and did little things to become known. The little things he did will serve as the heart of the country until the end of time. Although it is unfortunate he passed away Monday, Seeger lived a life that was full of meaning. Seeger left his mark on this country and will be remembered for centuries to come.