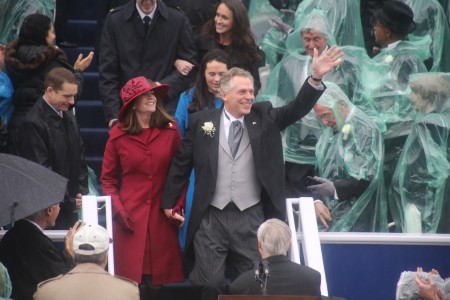 As Saturday showers ensued, a dismal downtown Richmond, Virginia was the site where Terry McAuliffe was inaugurated as Virginia’s 72nd Governor. McAuliffe (D) used the podium to put emphasis on a bipartisan message that will guide Virginia towards a bright future. Working with both Democrats and Republicans in the Virginia Legislature will be a very important approach for McAuliffe as he stated, “common ground doesn’t move towards us, we move towards it.”

Last November, McAuliffe won the Governorship of the Commonwealth against then-Attorney General Ken Cuccinelli in a nationally-recognized election. McAuliffe pulled ahead in the finally days of the race and won by just 3 percent.

Security was tight in downtown Richmond around Bank Street as two high-profile politicians made their way towards the Governor’s Mansion at the Virginia Capitol. Friends of the McAuliffe family, former President Bill Clinton and former Secretary of State Hillary Rodham Clinton were in attendance – the former President receiving much applause. 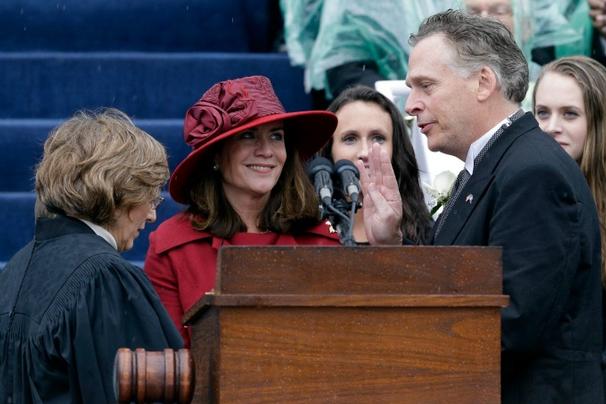 As the transfer of power was underway, McAuliffe had some kind words of the former executive of the Commonwealth, Bob McDonnell. “Governor McDonnell has provided for the smoothest transition imaginable, and I am grateful to him for that.” Virginia is known for its political smoothness. The Commonwealth has built an admired character of putting the common good heading of short-term gains of political capital. “It is also a tradition that must be sustained through constant work by leaders who choose progress over ideology,” McAuliffe said.

Common ground will be a very important theme for the McAuliffe Administration as he will be working with a Republican-controlled legislature. One of McAuliffe’s main campaign points on which he was elected was his support for one of the President’s signature reforms, the Affordable Healthcare Act (ACA). McAuliffe stated that he is very passionate about pursuing the expansion Medicaid in Virginia. “It is in the marrow of my bones,” he stated. However, the Republican-dominated legislature is interested in anything else besides the Medicaid provision to the controversial ACA. Speaker of the House William J. Howell (R-Stafford) stated, “We’ve talked about areas where I thought there was common ground.”  Some of these areas include the potential overhaul of the Commonwealth’s Standards of Learning (SOL) tests.

While the Virginia Legislature is not home gridlock, some of McAuliffe’s more liberal-minded policies can easily be blocked in the conservative chambers. The newly-instated Governor has stated that he will purse immigration reform, gay rights and the rights regarding reproduction in his tenure as chief executive of the Commonwealth. Pushing these issues, though, would likely alienate many social conservatives in the legislature.

In the next four years the Commonwealth of Virginia will be a place Washington may look towards for a lesson in bipartisanship. After all, for the first time in over two decades Virginia’s top three seats of political power were swept by Democrats in a historically red state. Even though McAuliffe won with 48 percent of the vote, a majority of his electorate came from the liberal bastions of Northern Virginia and Richmond. Therefore, the Governor will have his political savvy put to the test.