By Robert Lawson on January 26, 2014Comments Off on Ukraine Situation Hostile 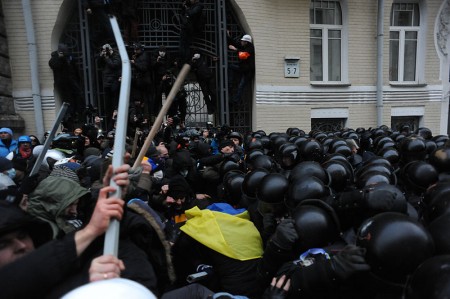 The situation in Ukraine is hostile. Protests that started months ago over the decision to break ties with the European Union (EU) have led to standoffs with the police that have now escalated into full-blown riots and social upheaval. RT was one of the few media outlets to capture moments on the ground in Ukraine from both sides of the struggle. Footage and testimony in the country paint pictures of grim injustices perpetrated by the authorities and by rioters.

It was reported today that a Ukraine Ministry of Defense building was under siege than taken over by the opposition. Agence France-Presse (AFP) reported that there was little or no resistance as anti-government protesters made barricades outside the building. Protesters there were shown holding a banner outside a building. There is a so-called “Maidan Guard” that is taking credit for leading some of the initiatives in Ukraine.

Sunday presented a clear response to the administration in Ukraine. The president offered top cabinet and government positions to members of the opposition group, but also threatened groups with an ultimatum. This may have been taken as a sign of weakness in Ukraine, because Sunday the opposition expressed no interest whatsoever in the government’s compromise. They rejected the offer from the president.

Violence and chaos has engulfed the country of Ukraine in the past week and the Kyiv Post reported that Ukrainian House has been overrun with protesters. People have been reportedly offered refuge there. Anastasia Vlasova, a writer for the Kyiv Post, said that activists were offered food and clothing and that a couple hundred police officers were staying at a three-star hotel somewhere in Kyiv. Temperatures were well below freezing. With the Ukraine situation so hostile, the cold couldn’t make things any better. Vlasova reported that donations were being handed out at Ukrainian House and photos showed bullet holes in windows there.

Arseniy Yatseniuk, an opposition leader in Ukraine, expressed his disagreement pretty clear on Twitter after the offer was made public. USA Today provided a transcript of the tweet.

Petrol bombs, make-shift clubs and Molotov cocktails have been used by many in the streets against the government’s forces and the Ministry of Defense has condemned the actions of violence taken against officers and others, reminding them of the families involved in the aftermath. A threat of force was also issued. Bullets pulled from the bodies of both citizens and police were reported to have been fired from common sporting rifles. Protesters blame police for shooting at them and the government says that violent rioters are responsible for much of the violence and chaos. The government did acknowledge a message of peace from some of the protesters, but warned of coercion to restore order.

Opposition leaders in Ukraine are calling for immediate elections and say that no offers have yet to meet this critical demand. The opposition is most interested in bringing the country of Ukraine into alignment with the European Union. This is the story of how the Ukraine situation has become so hostile.