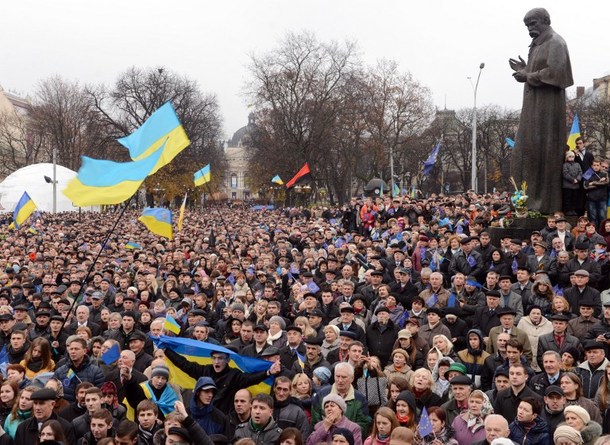 As the revolution in Ukraine seems to be gaining momentum, Ukraine’s Defense Ministry has insisted that President Viktor Yanukovych must restore peace to the country. The military has called on their commander-in-chief to do what is possible within the current framework of the law to bring about an end to the unrest that has plagued the country for months. In a statement, the Defense Ministry noted that it believes the seizure of state offices by anti-government factions is unacceptable as it prevents the government from properly functioning. It added that further conflict only threatens Ukraine’s territorial integrity.

Defense Minister Pavlo Lebedev has previously ruled out that Ukraine’s military would become involved in the confrontation on either side. In December, he said that Ukraine’s military cannot be used to restrict the rights of the Ukrainian people or enact a coup d’état to overthrow the government. The minister seemingly ended speculation of whether or not the military would intervene by saying armed forces would not be used against peaceful demonstrators. However, the demonstrations have since become violent. Lebedev emphasized that the constitution prohibits the military being used in internal political conflict and its function is specifically to defend Ukraine’s territorial sovereignty.

By asking Yanukovych to reach a peaceful political solution, the armed forces seemingly are desperate not to get involved in the revolution. However, what began as peaceful protesters has manifested into a full scale uprising against the government and its institutions. The people’s momentum has forced Yanukovych to offer amnesty for those detained and to repeal the much detested anti-protest laws that were recently enacted. The president’s concessions seemed to have resulted in little change as calls for him to leave office continue. With escalating violence and what seems to be a break down of the political system, the question remains as to whether or not the military will be able to remain neutral.

It has been reported that Yanukovych has allegedly attempted to buy the army’s loyalty by offering to double the salary of soldiers. This is according to former defense minister, Anatoliy Hrytsenko, who also asserted that soldiers have been ordered to show their allegiance to the government at various events. The current defense minister states the army will not get involved, a claim welcomed by the opposition, but it can be assumed that Lebedev does not have the final say in military matters. If a state of emergency is to get issued, then by the law the armed forces would have to come out of hiding.

As the revolution spreads throughout the country, the small number of police is being stretched to its limit. If revolutionaries continue to have momentum and Yanukovych is unable to muster a larger police force, it seems that the people have a good chance of removing the president from power. In hopes of gaining support of soldiers, the opposition has pledged that if it is to gain power it will raise funding for the armed forces. That being said, the military has yet to become a major actor in the revolution but continues to urge Yanukovych to politically solve the situation. A political compromise may restore order in Ukraine, something the military does not seem keen on doing itself.