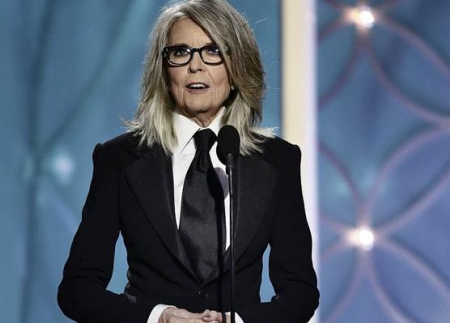 Woody Allen may be a legend in the entertainment industry, but, his Golden Globe Tribute at the 71st annual awards event was marred by child sex claims from his estranged son on Twitter. Although, his former partner Mia Farrow only hinted at the claims on her Twitter account. Allen Mia, who is a Hollywood legend in her own right, were a couple throughout the 1980’s until they separated in 1992. The two were romantically involved, but, never married. Woody and Mia adopted two children, neither one of which was Soon-Yi Previn, whom Allen declared his love for in the same year that he and Farrow broke up.

The couple had one child, Ronan Seamus Farrow – whose birth name was Satchel – although Mia herself later claimed that Ronan was actually Frank Sinatra’s child. Ronan has gone on record with the distaste he feels for his “biological” father’s behaviour concerning Mia’s adoptive daughter Soon-Yi and the child sex claims by Ronan’s other sister. Allen and Farrow adopted two children together, Dylan and Moshe, now known as Moses.

In 2013, Allen’s adoptive daughter, Dylan made further allegations that her father had sexually molested her from the age of seven. The now 28 year-old woman spoke to Vanity Fair magazine and told how much she feared Woody when she was a child. Mia Farrow actually pressed charges back in the 1990’s when the allegations first came to light. Dylan’s brother Ronan has publicly supported his sister’s allegations and repeatedly castigated Allen in the press.

Mia Farrow, who left Allen after finding nude pictures of her adopted daughter Soon-Yi; which had been taken by Woody; has no love for her former partner. Mia is, however, a member of Hollywood’s glitterati. She exudes old school class and follows the rules by not coming right out and claiming that Woody Allen was guilty of child sex on Twitter against the background of his getting a Golden Globe tribute which would have marred the legend’s moment.

Ronan, however, is not a member of old school Hollywood and therefore does not acknowledge the same rules of decorum that his mother does. Both Farrow’s, mother and son, were tweeting on their respective Twitter accounts during the 71st Annual Golden Globes event. In an evening that included the faux pas of listing Michael J. Fox’s being diagnosed with Parkinsons as a “fun fact,” the two Farrow’s instantly tweeted their reactions to Allen being honored on the show.

68 year-old Mia, couched her tweet carefully, but clearly, saying that it was time for ice cream and to switch channels to another program “#Girls.” The implication was clear and, quite possibly, immaculate in its implication. 26 year-old Ronan went straight for the Twitter jugular. His tweet came right out and referenced his sister’s allegation of sexual abuse that mother Mia had pressed charges for back when she was incandescent with rage over the Soon-Yi affair.

Allen was not present for the tribute, but, another “old flame,” Diane Keaton, accepted the award for Woody. She gave a moving speech outlining Allen’s accomplishments. Keaton would know as she worked with Allen in a large number of films. Speaking of his professional prowess and nimbly avoiding any mention of his personal life, the 68 year-old actress told how actresses over the years fought to be in his films. The reason, she revealed, was because they were good.

Allen began his career as a comedy writer for existing television comedy shows on top of his own work as a stand up comic and writing gags for other comedians. He wrote his first film, What’s Up Tiger Lily in 1966; he also made the film his directorial debut. That movie marked a turning point in his career where filmmaking outshone his desire to be a comic.

The Golden Globe tribute to Woody Allen was marred by child sex claims rehashed in 2013 by his adopted daughter Dylan and mentioned by Ronan Farrow on Twitter.  The charges brought up against Allen by Mia Farrow were thrown out back in the 1990’s by the court in order to protect Dylan at the time. A judge at the time ruled the charges were “inconclusive” and Allen himself has strenuously denied the allegations. Unfortunately, both Farrow’s, Mia and Ronan, continue to believe Dylan’s allegations and Ronan especially has not been shy in demonising his birth father.