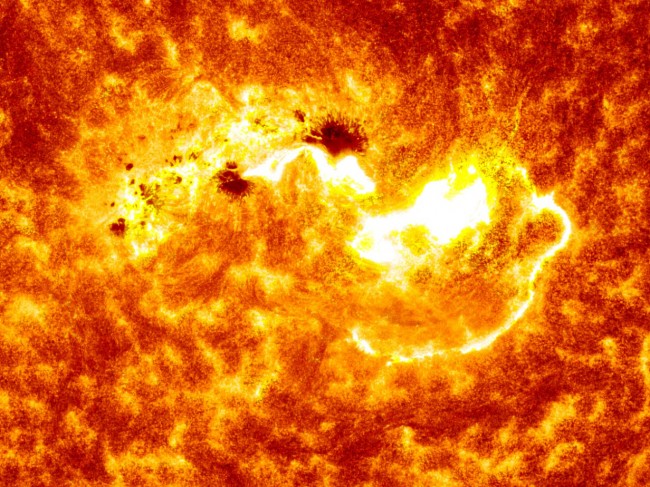 The sun unleashed a significant X-class solar flare at 1:32 p.m. EST on Jan. 7, 2014 – the first major flare of 2014. The moment was preceded by a mid-level flare earlier during the day, with both events taking place over a different region of a sizable sunspot group, currently positioned over the center of the sun.

An image of the sunspot cluster was snapped by the Solar Dynamic Observatory’s (SDO’s) Helioseismic and Magnetic Imager, revealing the location of two highly active regions of the sun. Labeled AR1943 and AR1944, the two active regions sit astride a giant sunspot complex.

Solar flares are characterized by a sudden brightening over the Sun’s surface, culminating in a large output of energy, and are very frequently followed by coronal mass ejections (CMEs). Each flare forcefully ejects large clouds of ions, electrons and atoms through the sun’s corona and into space. Solar flares are known to occur frequently around active regions near sunspots – relatively cool, dark regions on the surface of the sun; it is believed the powerful magnetic fields of sunspots create a connection between the solar interior and the corona, with flares driven by the rapid release of magnetic energy that builds up in the corona.

The latest solar flare was classified as an X1.2-class flare. X-class represents the most intense of all flares, and the number conveys information that specifically relates to the flare’s strength. For example, an X2 demonstrates twice the intensity of an X1, whereas an X3 has three times the intensity of an X1 solar flare. The weakest known flares are categorized as A-class, followed by B-class, C-class, then M-class flares, in order of increasing intensity.

Indeed, in the aftermath of the solar flare, a CME was observed. A giant cloud of solar particles exploded from the sun at 6:48 p.m. EST – an event that was captured by the European Space Agency and NASA’s Solar and Heliospheric Observatory (a.k.a. SOHO).

A coronal mass ejection – an enormous, balloon-shaped burst of solar wind that rises above the corona – often follows solar flares, throwing out enormous clouds of superheated plasma into space. The solar plasma is heated to tens of millions of degrees, and electrons, protons and heavy nuclei are subsequently accelerated close to the speed of light.

The radiation from a particular flare is unable to penetrate the Earth’s atmosphere and cause any physical harm to biological life. When the radiation hurled out into space is sufficiently intense, however, atmospheric disturbance may result and space weather in the vicinity of the Earth is affected. In the event of a CME, highly energetic particles within the solar winds can impact the Earth’s magnetosphere, potentially presenting danger to astronauts, spacecraft and GPS. In severe cases, geomagnetic storms are triggered that have been known to temporarily take down electrical power.

The NOAA’s Space Weather Prediction Center has updated their website, providing details pertaining to how the solar flare and CME could impact space weather. On Jan. 9 and Jan. 10, organization forecasters predict geomagnetic storm conditions will occur:

“SWPC Forecasters are anticipating G3 (Strong) Geomagnetic Storm conditions to occur on January 9 and 10. The source of this disturbance is a fairly fast Earth-directed coronal mass ejection (CME) launched from centrally-located Region 1944 at 1832 UTC (1:32 p.m. EST) on January 7.”

Meanwhile, according to NBC News, the event has forced the delay of a private rocket launch by Orbital Sciences. The organization was anticipated to launch its Antares rocket and robotic Cygnus craft, in a bid to perform a cargo delivery mission to the International Space Station (ISS). The organization has a highly lucrative contract with NASA to fulfill a series of supply sorties to the space station, along with Elon Musk’s SpaceX.

Orbital Sciences officials state they are actively monitoring the fallout from the X-class solar flare, originally seen on Tuesday.