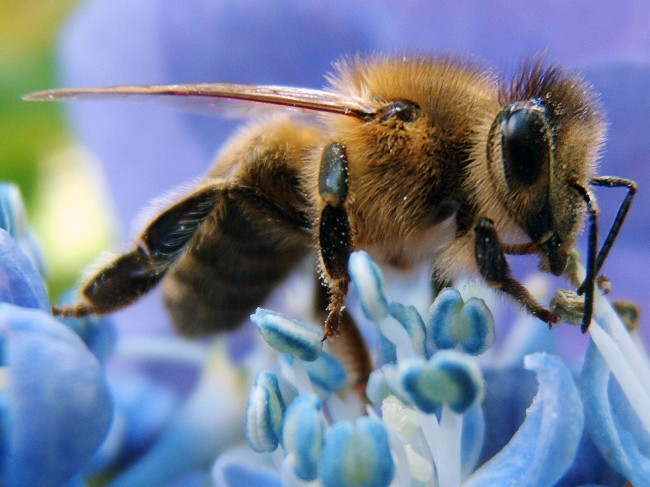 Zombie bees might sound like the latest thriller from Hollywood, but the truth is worse than – almost – anything Tinsel Town could dream up.  With a third of the world’s food sources at risk, honeybees face a new threat.

When Tom Johnson goes out each day to inspect his beehives, he takes a breath hoping he won’t see his colonies starting to collapse. An independent beekeeper, Johnson’s livelihood depends on maintaining strong, healthy hives. He also understands that much of the world’s food supply is dependent on the busy insects.

Beekeepers in Vermont have had a struggle for two decades now. First there were mite infestations, then temperatures that went to extremes and always the chance of colony collapse. Last autumn, a new menace appeared: zombie bees. Initially found in Burlington, VT, by Anthony Cantrell, it marked the first time zombie bees had been found in the Eastern United States.

America’s first zombie bees were discovered in 2008 by John Hafernik, a professor with San Francisco State University. Hafernik explains zombie bees by saying that a small fly called Apocephalus borealis gets on the bee and plants its eggs, which grow inside the bee. The resulting neurological damage to the bee results in erratic movements and unprecedented nighttime activity.

As the fly larvae develop inside the host honeybee, they attack the bees’ brains. Infected bees can be found walking in circles as well as losing the ability to stand. A tainted honeybee will remain quiet and inactive during daylight when they are normally busy seeking pollen.  The bee will also show other strange behaviors such as leaving the hive in bad weather conditions. This behavior can lead to the rapid spread of infection to neighboring bees and hives.

Development of the parasitic larvae normally takes a week. The larvae feed on the host bees’ muscles and nervous system. Mature larvae usually emerge from the host between the head and thorax and pupate outside the bees’ body. The entire life cycle of the fly is normally around 28 days.

Usually dying just a few hours after symptoms first appear, the zombie bees are not undead bees that will be roaming the earth for eternity. The truth could be worse. Until now, the fly had attached itself to bumblebees and this is the first time that honeybees have been the parasite’s host.

Chas Mraz, of Champlain Valley Apiaries, has pointed out that viruses and pesticides are still a bigger health issue for honeybees. As changing agricultural practices focus more on corn and soybeans, a lack of nectar and pollen could result. Without sufficient pollen, honeybees can not pollinate plants which scientists say will lead to a global food shortage.

May Berenbaum, an entomologist with the University of Illinois, has followed honeybees as they’ve been shipped cross country to aid in pollinating. It is this interstate shipping that led to the Eastern infestation of the zombie bee.

As if parasites were not enough, research by the U.S. Department of Agriculture, shows that a plant virus, tobacco ringspot, is also now infecting commercial honeybees. The fly which creates the zombie bee could also be responsible for transmitting viruses such as tobacco ringspot.

Scientists are quickly studying the affects and possibility of the flies hatching from dead bees and then completing their life cycle within the host hive. If this happens, then a hive could completely collapse within hours of being infected.

1. To determine areas in North America where the Zombie Fly is infecting honeybees
2. To determine how often honeybees leave their hives at night
3. To gather people interested in, and concerned about, zombie bees and train them as “citizen scientists.”

Just how important are honeybees to the human food supply? According to the Department of Agriculture, honeybees pollinate roughly 80 percent of flowering crops. Flowering crops make up about one-third of everything we eat, such as apples, broccoli and strawberries. They also pollinate alfalfa. If alfalfa – which is a chief component for the beef and dairy industries – disappears, then beef and dairy products will also start disappearing.

The bottom line is if honeybees disappear, they’ll probably take most of our plants with them. Mankind will be left with little more than a water diet.