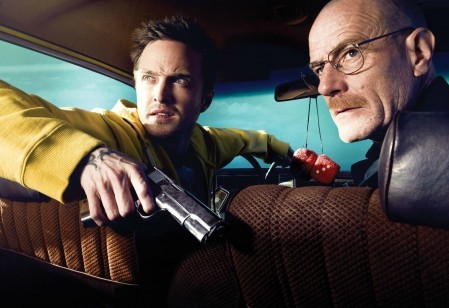 Aaron Paul and Bryan Cranston are keen to reprise their Breaking Bad roles in the new AMC spinoff Better Call Saul. Paul has been in talks to come back as Jesse Pinkman in the lawyer focussed prequel starring Bob Odenkirk. Casting for the new show started on Feb 28 and production on the new series will start in May.

This apparently holds true for Bryan Cranston as well. The man who made Walter White, aka Heisenberg, a household name has also confirmed that he would not say no to doing a cameo or two for the upcoming Odenkirk series. Show creator Gilligan has revealed that he would love to have most of the Bad cast reprise their roles in the AMC prequel to the popular five season show. With Aaron Paul and Cranston reprising their Breaking Bad roles in the AMC spinoff this new show sounds like it could be a welcome reunion for fans.

Jonathan Banks is reprising his role as the tough ex-cop who became a hitman, Mike Ehrmantraut. Even though Mike was shot by Walter in the last season of the show, as Better Call Saul is a prequel it makes sense to have Saul Goodman’s right-hand man be a regular.

Unfortunately, another character that “bit the big one” in season five will not be back. Dean Norris, who played Walter’s brother-in-law and FBI tough guy Hank Schrader, will not be paying a visit to the new show, at least according to him. The 50 year-old Under the Dome star revealed that he doesn’t like reprising old roles.

Norris has gone on record that he hates the idea of going back to any previous role. While the actor’s decision makes a certain amount of sense, it feels like a missed opportunity to get more backstory on this hard-nosed FBI agent married to Skyler’s sister. Dean did say that he feels the prequel sounds “awesome” and that he cannot wait to see Better Call Saul.

Rather annoyingly, the only two actors who have been acknowledged to be signed on as regulars in the new spinoff are Odenkirk and Banks. 51 year-old Odenkirk has previously said that he is very pleased to be given this chance to further explore his Breaking Bad character.

The news that Aaron Paul and Bryan Cranston could be reprising their Breaking Bad roles for the AMC spinoff, Better Call Saul will, hopefully be just the beginning of series favorites that will be making appearances in the show. Dean Norris may not want to return, but it would certainly be nice to see Agent Gomez, aka Gomey, in a cameo or two. Steven Michael Quezada has not been mentioned as yet, nor has Giancarlo Esposito who played Gus. It is, however, early days and both Gus and Gomey could still show up.