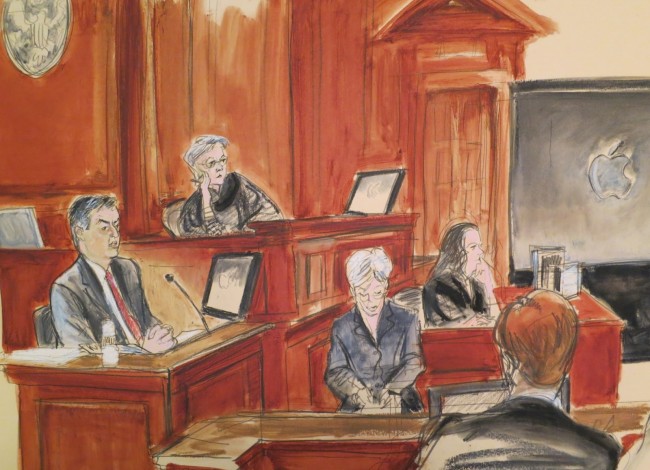 Apple may have to pay $840 million potential penalty over its involvement in price-fixing e-books, as it faces a new damages claim. Apple has been in the court as defendant in state and consumer antitrust claims in connection with e-book arrangements with numerous publishers that led the U.S Justice Department to sue the company.

State attorneys general and consumers sued the world’s most well-known technology company over its e-book pricing. On Friday, Steven Berman, the attorney leading a class action against the Cupertino company, filed the claim in New York on behalf of e-book customers in 33 states after the Justice Department successfully won the antitrust lawsuit on July 2013. The plaintiffs in the claim used evidence provided during the last year’s trial and now are seeking at least $280 million in damages and asking the court to triple that amount. The plaintiffs alternatively argue that $231 million in damages is not disputable if the court finds it more admissible than their amount. In other words, Apple must pay the bare minimum of $231 million in damages.

The basis for the plaintiff’s asking the court to triple the amount of damages stems from the U.S. antitrust laws.  A company found guilty of violating the U.S. antitrust laws may have to pay a threefold damage. Based on the amount of the cash Apple had at the end of 2013, the amount is equivalent to 0.5 percent of the $158.8 billion in cash. The plaintiff argue that the Justice Department had proven successfully at the 2013 trial that Apple masterminded a scheme to fix e-book prices with publishers in order to force other on-line vendors to pay a higher price for e-books sold.

The core base of $840 million potential penalty over price-fixing e-books Apple faces is not the agency model itself, which allows publishers to price, but the company’s meeting with five major publishers, advising them to accept the agency model, and assisting them to coordinate efforts in pricing e-books. If the plan were successful, Apple could have boosted its shares in e-book market and take 30 percent of each e-book sale or 14.9 percent increase in sales for e-book, and publishers would force Amazon to abandon a ghastly $9.99 price point for e-books. As several publishers settled with the Justice Department even before the trial, Apple was left alone to face the charge in the court and found guilty of price-fixing e-books.

The plaintiffs in the Friday court filing used the evidence from the last year’s trial, especially emails by Eddy Cue, the Apple’s senior executive known as “Apple’s Mr. Fix-It.” They then used new witness, Roger Noll, economics professor at Stanford University, who estimated the increase in e-book sales for Apple should be 18.1 percent or $280 million in sales, instead of 14.9 percent found in the 2013 trial.

After losing the trial in July 2013, Apple asked Denise L. Cote to remove Michael Bromwich, a court-appointed monitor responsible for supervising the company’s compliance with the ruling. Judge Cote rejected the request in January 13, 2014, and Apple has been granted a temporary halt to the oversight by the U.S. Court of Appeals. However, after a small victory in the issues of oversight, Apple now faces the $840 million potential penalty over e-books.