Barbecuing Food Could Increase Chance of Diabetes or Alzheimer’s Disease 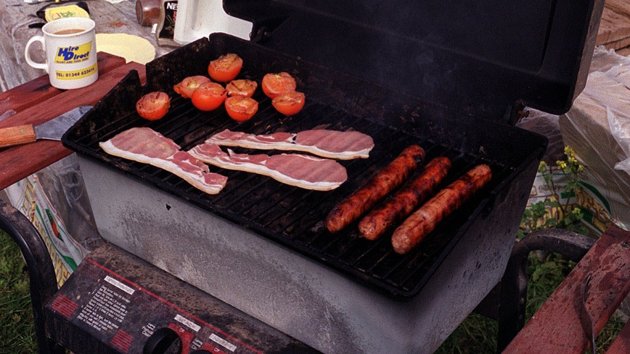 People in the United States are major fans of the outdoor barbecuing of food, so much that over 60 percent of Americans actually keep using their grills all year long, even in the winter, but a new research report is showing that this could increase the chance of diabetes or Alzheimer’s disease. The research has come from the National Academy of Sciences and proposes that dining on grilled or broiled meats have high amounts of advanced glycation end products or AGEs. These food compounds have been linked to the deterioration of many progressive diseases such as Alzheimer’s disease and diabetes.

AGEs are already inside the human body at small levels. However in the research study, the researchers discovered that eating foods which contained the raised amounts of AGEs raises the level in the body, therefore increasing the threat of related diseases. To find out how this happened, the investigating scientists scrutinized the mental health of mice which ate foods that had high amounts of AGEs in them. Such a diet has a lot of saturated fat, empty carbohydrates and is usually low in whole grains, poultry, seafood, vegetables and fresh fruit. The researchers discovered that there were high levels of AGEs in the brains of the mice and those chemicals were suppressing an element called SIRT1 that was needed in both brain tissue and blood of the mice.

SIRT1 is a chemical that is needed to regulate immune, endocrine and neuronal functions. Individuals who suffer from metabolic and neurodegenerative diseases tend to have inhibited SIRT1 production.

The mice tested and found to have the high amounts of AGEs began to have problems with their motor and cognitive capabilities. They also developed a type of amino acid which has been found to be a link in the development of Alzheimer’s disease. It ends up creating plaque inside the brain. The majority of them also ended up with some sort of metabolic syndrome and their chance of diabetes and heart disease rose greatly.

Such high AGE amounts affect human beings in comparable ways. So to see what the AGEs did to people, the researchers had a clinical health program where they examined healthy individuals over 60 years of age. Some of the people had high AGE levels and others had low. After observing the test participants for over nine months, the scientists discovered that the individuals who had high AGE levels in their blood had started to develop cognitive waning, had less SIRT1 inside the blood and were showing signs of beginning resistance to insulin resistance. The subjects who had low AGE had stayed healthy.

With these findings, the researchers stated that following a diet that was high in non-AGE high foods might help keep diabetes and Alzheimer’s disease at bay. But it is not just the food ingested but also how they are cooked which is just as important. Such as foods that are prepared under lesser levels of heat and in the presence of more water, helps to contain AGEs. These new findings seem to highlight the importance of not just what people consume, but also how it is prepared.

Even though people in the United States are major fans of the outdoor barbecue, so much that over 60 percent of Americans actually keep using their grills all year long, even in the winter, a new research report might be showing that the love of fixing food this way may increase the chance of diabetes or Alzheimer’s disease.