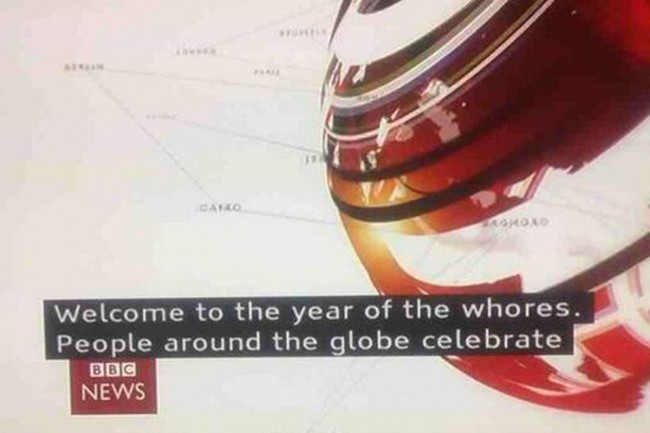 The Chinese New Year may have got off to a thunderous start this weekend, however the good intentions of BBC to wish it’s viewers got completely messed-up by a massive typographical blunder during a telecast. BBC, in attempt to welcome the year of the horse ended up replacing the word “horse” with “whores” much to the horror of the shocked viewers.

The error in its coverage soon went viral thanks to the ever alert viewers and became the point of ridicule of many who did not wish to spare BBC for its typo. The screen-shots of the error went online within seconds of it being aired and got distributed like wildfire across the globe. There were even references to the “arch bitch of Canterbury” typo that BBC had subjected itself to a while back to address the Archbishop of Canterbury.

BBC is not new to such errors in its titles and it has found itself in many a tight spots earlier, leaving many viewers far from amused while struggling to find valid reasons for each of the gaffes that have been aired. Its subtitles have also been under fire from deaf viewers in 2011. The channel had to face the ire of groups representing the hearing impaired as many typos were noted especially during its live telecast.

The recent blunder BBC had with the Chinese New Year celebration will only add to its growing list of embarrassing moments which it would like to conveniently forget. Welcoming a New Year with a mention of whores is not exactly a very proud moment for any news channel. BBC soon corrected the mistake and directed its attention to extensively cover the London parade with its hues of colors and dragons welcoming the Year of the Horse.

The parade witnessed by thousands left many bystanders with memories to last a lifetime. Many in the attendance at the parade also tweeted their desire to visit China and be a part of the complete celebrations as well.

The year of the horse is considered very lucky since horse is considered among the two most popular zodiac among the Chinese, with the dragon being the most popular. The popularity of the horse stems from the fact that it is revered as a symbol of energy and loyalty. However, feng-shui experts beg to differ, calling the wooden horse a harbinger of conflicts and natural calamities which is something similar to what is being witnessed today across the planet including high temperatures and chilly winters.

Nevertheless, celebrations are already underway in China and the New Year is being welcomed with the fervor and fan fare that it deserves. The tradition of red envelopes with words of prosperity embedded in gold continues to be exchanged between the Chinese. The marketplace is brimming to the top with goodies, lanterns, decorations and delicacies as part of the festivities. Fireworks lighted up skies and brightened the night up throughout China to mark the beginning of the New Year.

It was this celebration that BBC also wished to be part of, had it not been for its blunder. The year of horse becoming “The Year of the Whores” caused a major embarrassment for the internationally renowned British news agency and it would be surely investigating into whether the error was intentional or simply a case of words getting lost in translation.