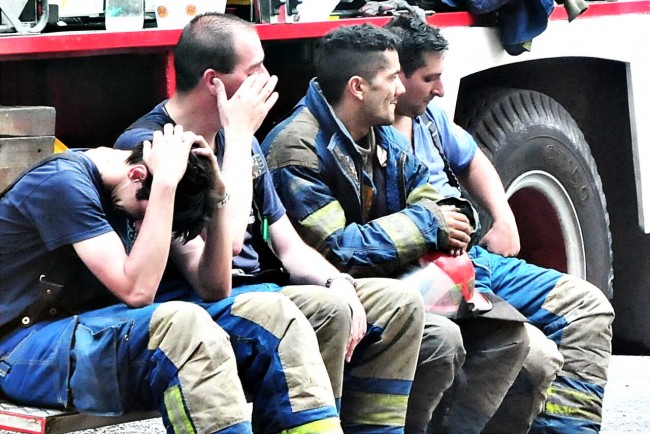 Nine Buenos Aires firefighters were killed in a blazing warehouse fire in Argentina’s Capital, Buenos Aires, Wednesday.  The fire destroyed a storage facility for corporate and banking documents.  While the cause is still unknown, sources say that arson is suspected.

The firefighters and civil defense workers were killed when a brick wall collapsed on a group of first responders on the street adjacent to the building.  Frantic rescuers dug by hand through the rubble to try to reach their co-workers.  10 fire companies were called to the scene of the sprawling building, which was destroyed.

Both Argentina President, Christian Fernandez de Kirchner, and Buenos Aires’ Mayor, Mauricio Macri, have been silent about the fire.

Kirchner, who has kept an uncharacteristically low profile since the massive devaluation of the peso, didn’t issue a statement.  Instead the declaration of a national two-day mourning period was announced by Cabinet Chief Jorge Capitanich.

Macri, who is speculated to be considering a run for the presidency in 2016, was strangely silent also.  Although seen four blocks from the tragedy, he refused to go to the scene of the fire and speak with firefighters at Iron Mountain.  He also has not made a public statement as of this writing. 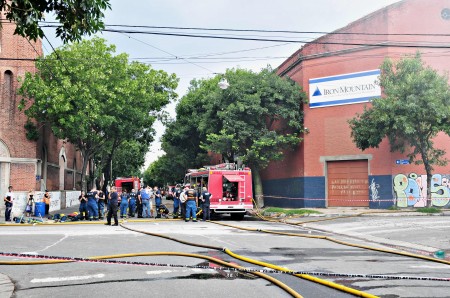 Iron Mountain issued a statement through a spokesman saying, “we are deeply saddened by the deaths of the brave first responders who rushed to save our facility. Our thoughts are also with those who have been hospitalized, and we wish them a quick and complete recovery.”

Iron Mountain was started in 1951 by Herman Knaust.  Knaust, acquired his wealth growing and marketing mushrooms.  Needing more space to grow his produce, he bought a depleted iron mine in Livingston, New York.  By 1950, the mushroom market had changed and Knaust started looking for a different use for his mine, which he had named “Iron Mountain.”

With the Cold War between America and Russia growing, Knaust saw an opportunity in protecting corporate information from disasters such as nuclear attack.

Iron Mountain’s storage facility in Boyers, Pennsylvania is the firm’s best known asset.  Located near the town of Butler, Pennsylvania, it began record storage in 1954.  The Boyers facility stores Bill Gates’ Corbis photo collection in a cave 220 feet below the surface.

Iron Mountain has over 1,000 storage facilities throughout the world.  In addition to the Gates’ collection, it also stores the wills of Charles Dickens and Princess Diana as well as the original recordings of Frank Sinatra. 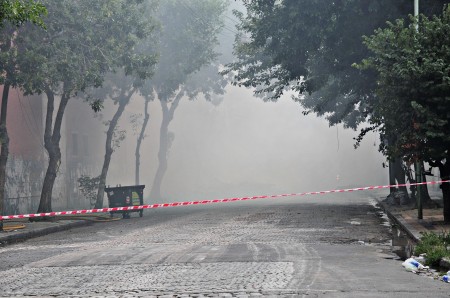 If arson is found to be the cause, it will be the third time for the Boston-based firm.  Previous fires, in New Jersey in 1997 and London in 2006, were also caused by arson.  The building, in the Barracas barrio of Buenos Aires, was reportedly equipped with a sprinkler system as well as fire-detection devices.

The 1997 New Jersey fire destroyed an Iron Mountain Warehouse filled with corporate documents.  Investigators spoke with scores of witnesses who refused to speculate on any theories about motivation for the arson.

In July 2006, a six-story warehouse on the outskirts of London went up in flames.  The warehouse held the archives of over 600 customers, including files by several major London law firms.  City fire investigators concluded the fire was caused by arson as well.

While Buenos Aires mourns the death of nine firefighters, available sources indicate there were no first responders killed in the 1997 or 2006 blazes.