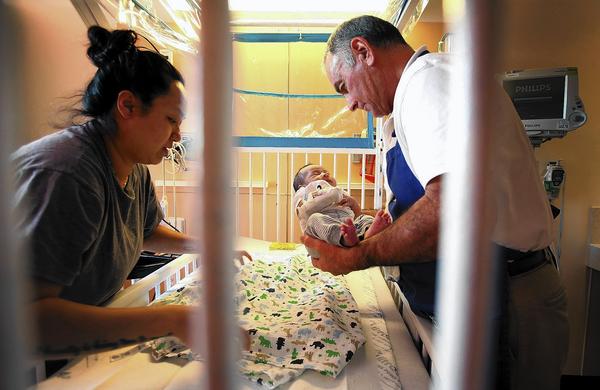 Math teacher Jim O’Connor, former navy veteran who worked aboard the U.S.S. Enterprise during the Vietnam War, is strict, refusing to baby his students at St. Francis High School in La Canada, CA. O’Connor was raised in Brooklyn, New York. As a young man he spent three years in the navy, working as an electrician on the renowned aircraft carrier. Jim O’Connor is a man accustomed to discipline, who never married and never had children—at least not his own.

After his time in the Navy was over, O’Connor worked for the New York Port Authority, where he serviced the Holland and Lincoln tunnels as an electrician. While doing that, he attended night school over several years, and then went out west to California with his engineering degree to work for Hughes Aircraft. He began volunteering as a youth sports coach, and ended up deciding to make a career change to teaching, which he has now been doing for 38 years.

The math teacher has taught in two California schools over the last three decades—a lot longer than he was in Vietnam, and since before all of his students were babies. If a student at Catholic-run St. Francis, a prep school in suburban L.A., had been asked a year ago what their impression of their teacher was, they would have described a tall, proud man with a straight back, short, crew-cut gray hair and the ability to maintain discipline in a class filled with 30 teenage boys—no mean feat. One student reports that anyone who looked even once at the wall clock would be in O’Connor’s black books, at least for the rest of the class.

What does this serious, even at times seemingly severe teacher have to say for himself? Jim O’Connor is proud of his teaching method, acknowledging that it would be nice if school could be fun, but saying that it just is not so. He also acknowledges that teaching cannot happen in a classroom without discipline, and it is this side of him that students knew—until last year.

Two senior St. Francis boys, Michael Tinglof and Pat McGoldrick, were in charge of a student-run blood drive this school year. The boys went out to Children’s Hospital Los Angeles for a tour of where things would take place, and when they mentioned to anyone there what school they were from, they were instant celebrities. All anyone they ran into could talk about was their math teacher, who is actually semi-retired and works 10 days out of the month at the age of 70. The boys were puzzled as to why Mr. O’Connor, as they know him, was just about a superstar at the hospital, being warmly referred to as Jim, or “the baby-whisperer.”

O’Connor has been a volunteer at the Children’s hospital since 1989. It all began when a nurse and wife of a friend asked him to donate blood. The navy vet has Type O negative, not only rare, but it also stands in as universal blood for any blood type in an emergency. Jim began giving blood, and over the first several years watched “TLC” volunteers holding sick infants and walking around with them. The math teacher had been through the Vietnam War and had moved across the country from New York to California, but he did not have a baby or family of his own to take up all his time. He decided to give more of that time to the hospital, and he has been doing so ever since.

For 20 years now, three times a week, baby-whisperer Jim O’Connor goes to the Children’s Hospital of Los Angeles and holds sick babies. He holds loved babies and lonely babies. Mostly, he holds the ones who get the least visitors. The teacher says he’s drawn to the infants that do not have enough attention, whether because the parents work, live far away, or because the child comes from a home where abuse is suspected, and they are to be put into foster care. Whatever the reason, these are the babies Jim comforts.

Nurses at the hospital say Jim is invaluable and they do not know what they would do without him. R.N. Sherry Nolan describes him as a natural cuddler, saying he can get the fussiest babies to be calm. His tasks involve holding, feeding, walking around with the infants or just staying still. He has even held a dying baby when its parents could not emotionally manage to go through that themselves.

O’Connor says when he was new at it, he was nervous. The Vietnam vet who had all but started over in California, including a new profession teaching math, was worried about dislodging the tubes and wires babies were hooked up to. Over time he got accustomed to it, and now relaxes the infants with his deep voice and by holding them when there is no one else there to do so. Still a donor, he is now the hospital’s largest blood and platelet donor ever, having given over 72 gallons of blood and platelets.

One Response to "California Math Teacher All Vietnam and Babies"